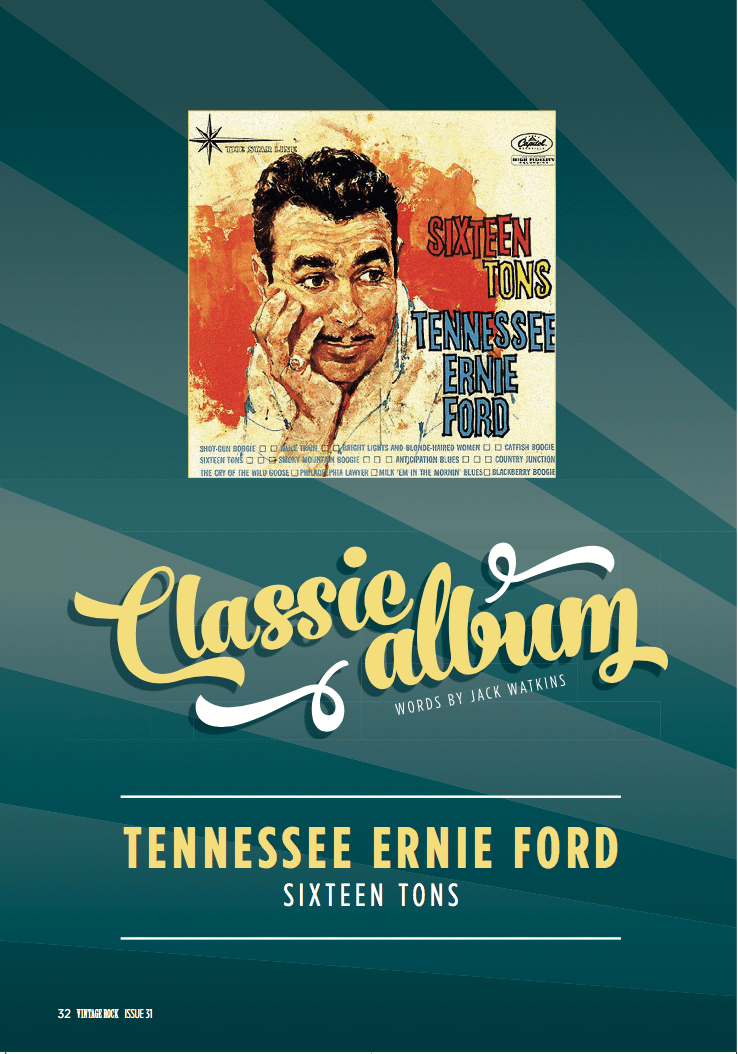 Tennessee Ernie Ford was a middle of the road TV showman when
he released the album bearing the title of his biggest hit. But many
of the early-50s tracks within its grooves actually revealed an underrated album of earthy, groundbreaking boogie. Jack Watkins hauls Sixteen Tons for another spin.

When Capitol Records released the 12-track LP Sixteen Tons
in 1960, Tennessee Ernie Ford was safely ensconced in the public mind as a middle of the road entertainer.

The host of a prime-time NBC variety show which, at its peak, attracted 30 million viewers, his persona mixed sleek-suited sheen with homely, pipe-smoking good humour. Cornball catchphrases like “bless your pea-pickin’ hearts” played on his Tennessee country boy roots. But while he fooled around with his guests in a folksy kind of way, his music had grown increasingly mainstream and safe.

His then-new 1960 album, however, batched together his most celebrated hit with 11
classic other singles, and was a reminder of
the earthier material he had delivered in the first years of the 1950s. Crucially, it included several of the ground-breaking country boogies that put him up there with the likes of the

Bill Haley & The Saddlemen, The Maddox Brothers and Rose, Cowboy Copas and Moon Mullican, as one of the more revved-up performers in the hillbilly field of the period. In a recently released, beautifully curated Bear Family Records boxed set, Tennessee Ernie Ford: Portrait of an American Singer, music historian Ted Olson asserts that: “In his swaggering performances of mostly self- composed boogie songs, recorded a few years before Sam Phillips’ legendary discoveries

in Memphis, Ford was arguably the first rock’n’roller – or at least among the very first wave of musicians – who fused black and white styles and repertoires to forge a revolutionary new sound.”