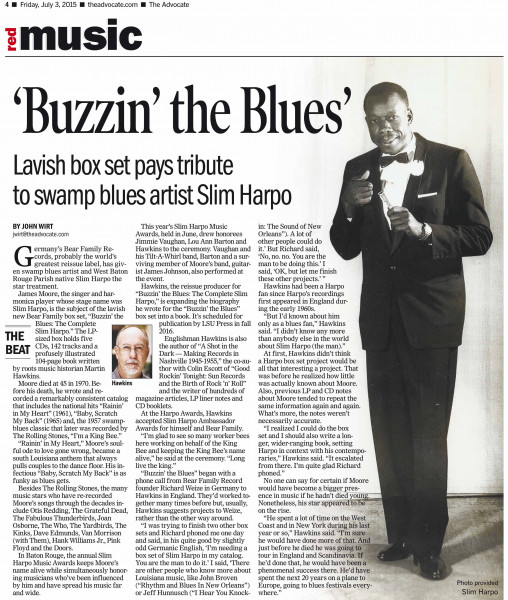 Buzzin' the Blues
Lavish box set pays tribute to swamp blues artist Slim Harpo
BY JOHN WIRT [email protected]
Germany's Bear Family Records, probably the world's greatest reissue label, has given swamp blues artist and West Baton Rouge Parish native Slim Harpo the star treatment. James Moore, the singer and harmonica player whose stage name was Slim Harpo, is the subject of the lavish new Bear Family box set, "Buzzin' the    Blues: The Complete Slim Harpo." The LP-sized box holds five CDs, 142 tracks and a profusely illustrated 104-page book written by roots music historian Martin Hawkins. Moore died at 45 in 1970. Be- Hawkins fore his death, he wrote and recorded a remarkably consistent catalog that includes the national hits "Rainin' in My Heart" (1961), "Baby, Scratch My Back" (1965) and, the 1957 swamp-blues classic that later was recorded by The Rolling Stones, "I'm a King Bee." "Rainin' in My Heart," Moore's soul-ful ode to love gone wrong, became a south Louisiana anthem that always pulls couples to the dance floor. His in-fectious "Baby, Scratch My Back" is as funky as blues gets. Besides The Rolling Stones, the many music stars who have re-recorded Moore's songs through the decades in-clude Otis Redding, The Grateful Dead, The Fabulous Thunderbirds, Joan Osborne, The Who, The Yardbirds, The Kinks, Dave Edmunds, Van Morrison (with Them), Hank Williams Jr., Pink Floyd and the Doors. In Baton Rouge, the annual Slim Harpo Music Awards keeps Moore's name alive while simultaneously honor-ing musicians who've been influenced by him and have spread his music far and wide.

This year's Slim Harpo Music Awards, held in June, drew honorees Jimmie Vaughan, Lou Ann Barton and Hawkins to the ceremony. Vaughan and his Tilt-A-Whirl band, Barton and a sur-viving member of Moore's band, guitar-ist James Johnson, also performed at the event. Hawkins, the reissue producer for "Buzzin' the Blues: The Complete Slim Harpo," is expanding the biography he wrote for the "Buzzin' the Blues" box set into a book. It's scheduled for publication by LSU Press in fall 2016. Englishman Hawkins is also the author of "A Shot in the Dark — Making Records in Nashville 1945-1955," the co-au-thor with Colin Escott of "Good Rockin' Tonight: Sun Records and the Birth of Rock 'n' Roll" and the writer of hundreds of magazine articles, LP liner notes and CD booklets. At the Harpo Awards, Hawkins accepted Slim Harpo Ambassador Awards for himself and Bear Family. "I'm glad to see so many worker bees here working on behalf of the King Bee and keeping the King Bee's name alive," he said at the ceremony. "Long live the king." "Buzzin' the Blues" began with a phone call from Bear Family Record founder Richard Weize in Germany to Hawkins in England. They'd worked to-gether many times before but, usually, Hawkins suggests projects to Weize, rather than the other way around. "I was trying to finish two other box sets and Richard phoned me one day and said, in his quite good by slightly odd Germanic English, 'I'm needing a box set of Slim Harpo in my catalog. You are the man to do it.' I said, 'There are other people who know more about Louisiana music, like John Broven ("Rhythm and Blues In New Orleans") or Jeff Hunnusch ("I Hear You Knock-
in: The Sound of New Orleans"). A lot of other people could do it.' But Richard said, `No, no. no. You are the man to be doing this.' I said, 'OK, but let me finish these other projects.' " Hawkins had been a Harpo fan since Harpo's recordings first appeared in England dur-ing the early 1960s. "But I'd known about him only as a blues fan," Hawkins said. "I didn't know any more than anybody else in the world about Slim Harpo (the man)." At first, Hawkins didn't think a Harpo box set project would be all that interesting a project. That was before he realized how little was actually known about Moore. Also, previous LP and CD notes about Moore tended to repeat the same information again and again. What's more, the notes weren't necessarily accurate. "I realized I could do the box set and I should also write a longer, widerranging book, setting Harpo in context with his contempo-raries," Hawkins said. "It escalated from there. I'm quite glad Richard phoned." No one can say for certain if Moore would have become a bigger pres-ence in music if he hadn't died youri--
Nonetheless, his star appeared to-be on the rise. "He spent a lot of time on the West Coast and in New York during his last year or so," Hawkins said. "I'm sure he would have done more of that. And just before he died he was going to tour in England and Scandinavia. If he'd done that, he would have been a phenomenal success there. He'd have spent the next 20 years on a plane to Europe, going to blues festivals every-where."
Photo provided Slim Harpo