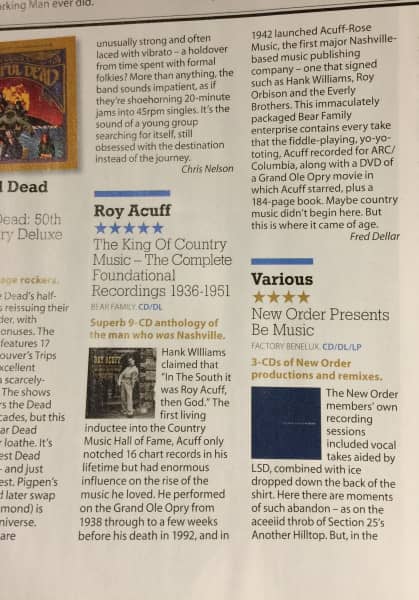 Roy Acuff ***** The King Of Country Music — The Complete Foundational Recordings 1936-1951 BEAR FAMILY. CD/DL Superb 9 CD anthology of the man who was Nashville.
Hank Williams claimed that "In The South it was Roy Acuff, then God." The first living inductee into the Country Music Hall of Fame, Acuff only notched 16 chart records in his lifetime but had enormous influence on the rise of the music he loved. He performed on the Grand Ole Opry from 1938 through to a few weeks before his death in 1992, and in
1942 launched Acuff-Rose Music, the first major Nashville-based music publishing company - one that signed such as Hank Williams, Roy Orbison and the Everly Brothers. This immaculately packaged Bear Family enterprise contains every take that the fiddle-playing, yo-yo-toting, Acuff recorded for ARC/ Columbia, along with a DVD of a Grand Ole Opry movie in which Acuff starred, plus a 184-page book. Maybe country music didn't begin here. But this is where it came of age. Fred Dellar