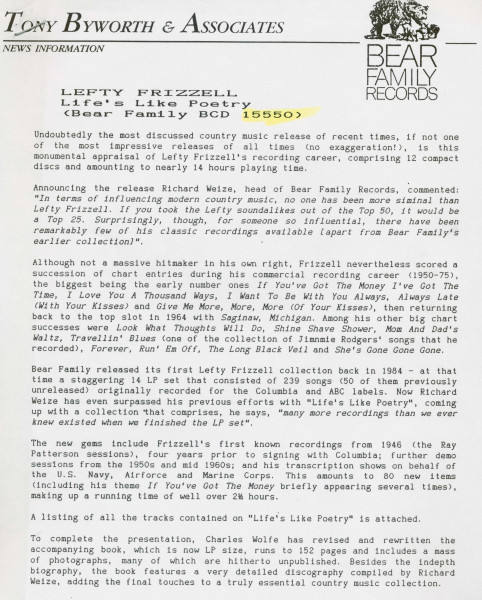 Undoubtedly the most discussed country music release of recent times, if not one
of the most impressive releases of all times (no exaggeration!), is this
monumental appraisal of Lefty Frizzell's recording career, comprising 12 compact
discs and amounting to nearly 14 hours playing time.
Announcing the release Richard Weize, head of Bear Family Records, commented:
'In terms of influencing modern country music, no one has been more siminal than
Lefty Frizzell. If you took the Lefty soundalikes out of the Top 50, it would be
a Top 25. Surprisingly, though, for someone so influential, there have been
remarkably few of his classic recordings available [apart from Bear Family's
earlier collection)'.

Although not a massive hitmaker in his own right, Frizzell nevertheless scored a
succession of chart entries during his commercial recording career (1950-75),
the biggest being the early number ones If You've Got The Money I've Got The
Time, I Love You A Thousand Ways, I Want To Be With You Always, Always Late
(With Your Kisses) and Give Me More, More, More (Of Your Kisses), then returning
back to the top slot in 1964 with Saginaw, Michigan. Among his other big chart
successes were Look What Thoughts Will Do, Shine Shave Shower, Mom And Dad's
Waltz, Travellin' Blues (one of the collection of Jimnmie Rodgers' songs that he
recorded), Forever, Run' Em Off, The Long Black Veil and She's Gone Gone Gone.
Bear Family released its first Lefty Frizzell collection back in 1984 - at that
time a staggering 14 LP set that consisted of 239 songs (50 of them previously
unreleased) originally recorded for the Columbia and ABC labels. Now Richard
Weize has even surpassed his previous efforts with 'Life's Like Poetry', coming
up with a collection that comprises, he says, 'many more recordings than we ever
knew existed when we finished the LP set'.

The new gems include Frizzell's first known recordings from 1946 (the Ray
Patterson sessions), four years prior to signing with Columbia; further demo
sessions from the 1950s and mid 1960s; and his transcription shows on behalf of
the U.S. Navy, Airforce and Marine Corps. This amounts to 80 new items
(including his theme If You've Got The Money briefly appearing several times),
making up a running time of well over 2 hours.

A listing of all the tracks contained on 'Life's Like Poetry' is attached.
To complete the presentation, Charles Wolfe has revised and rewritten the
accompanying book, which is now LP size, runs to 152 pages and includes a mass
of photographs, many of which are hitherto unpublished. Besides the indepth
biography, the book features a very detailed discography compiled by Richard
Weize, adding the final touches to a truly essential country music collection.