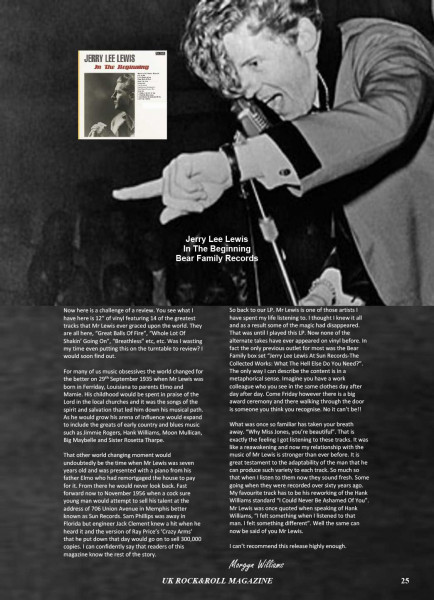 Now here is a challenge of a review. You see what I have here is 12" of vinyl featuring 14 of the greatest tracks that Mr Lewis ever graced upon the world. They are all here, "Great Balls Of Fire", "Whole Lot Of Shakin' Going On", "Breathless" etc, etc. Was I wasting my time even putting this on the turntable to review? I would soon find out.

For mang of us music obsessives the world changed for the better on 29' September 1935 when Mr Lewis was born in Ferriday, Louisiana to parents Elmo and Mamie. His childhood would be spent in praise of the Lord in the local churches and it was the songs of the spirit and salvation that led him down his musical path. As he would grow his arena of influence would expand to include the greats of early country and Blues music such as Jimmie Rogers, Hank Williams, Moon Mullican, Big Maybelle and Sister Rosetta Tharpe.
That other world changing moment would undoubtedly be the time when Mr Lewis was seven years old and was presented with a piano from his father Elmo who had remortgaged the house to pay for it. From there he would never look back. Fast forward now to November 1956 when a cock sure young man would attempt to seil his talent at the address of 706 Union Avenue in Memphis better known as Sun Records. Sam Phillips was away in Florida but engineer Jack Clement knew a hit when he heard it and the version of Ray Price's 'Crazy Arms' that he put down that day would go on to seil 300,000 copies. I can confidently say that readers of this magazine know the rest of the story

So back to our LP. Mr Lewis is one of those artists I have spent my life listening to. I thought I knew it all and as a result some of the magic had disappeared. That was until I played this LP. Now none of the alternate takes have ever appeared on vinyl before. In fact the only previous outlet for most was the Bear Family box set "Jerry Lee Lewis At Sun Records-The Collected Works: What The Hell Else Do You Need?". The only way I can describe the content is in a metaphorical sense. Imagine you have a work colleague who you see in the same clothes day after day after day. Come Friday however there is a big award ceremony and there walking through the door is someone you think you recognise. No it can't be!!

What was once so familiar has taken your breath away. "Why Miss Jones, you're beautiful". That is exactly the feeling I got listening to these tracks. lt was like a reawakening and now my relationship with the music of Mr Lewis is stronger than ever before. lt is great testament to the adaptability of the man that he can produce such variety to each track. So much so that when I listen to them now they sound fresh. Some going when they were recorded over sixty years ago. My favourite track has to be his reworking of the Hank Williams standard "I Could Never Be Ashamed Of You". Mr Lewis was once quoted when speaking of Hank Williams, "I felt something when I listened to that man. I felt something different". Well the same can now be said of you Mr Lewis.
I can't recommend this release highly enough.