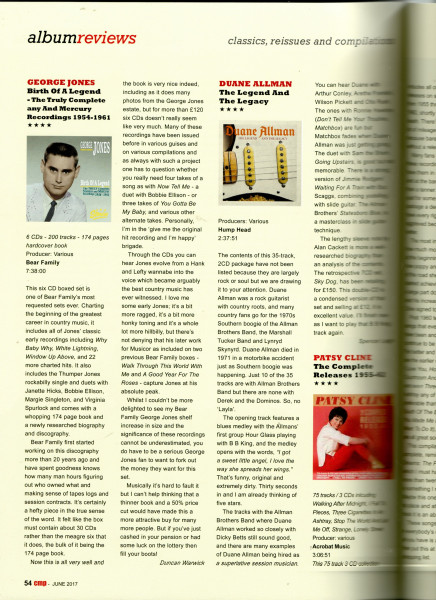 6 CDs - 200 tracks - 174 pages hardcover book Producer: Various Bear Family 7:38:00
This six CD boxed set is one of Bear Family's most requested sets ever. Charting the beginning of the greatest career in country music, it includes all of Jones' classic early recordings including Why Baby Why, White Lightning, Window Up Above, and 22 more charted hits. It also includes the Thumper Jones rockabilly single and duets with Janette Hicks, Bobbie Ellison, Margie Singleton, and Virginia Spurlock and comes with a whopping 174 page book and a newly researched biography and discography. Bear Family first started working on this discography more than 20 years ago and have spent goodness knows how many man hours figuring out who owned what and making sense of tapes logs and session contracts.

It's certainly a hefty piece in the true sense of the word. It felt like the box must contain about 30 CDs rather than the meagre six that it does, the bulk of it being the 174 page book. Now this is all very well and the book is very nice indeed, including as it does many photos from the George Jones estate, but for more than £120 six CDs doesn't really seem like very much. Many of these recordings have been issued before in various guises and on various compilations and as always with such a project one has to question whether you really need four takes of a song as with Now Tell Me - a duet with Bobbie Ellison - or three takes of You Gotta Be My Baby, and various other alternate takes. Personally, I'm in the 'give me the original hit recording and I'm happy' brigade. Through the CDs you can hear Jones evolve from a Hank and Lefty wannabe into the voice which became arguably the best country music has ever witnessed.

I love me some early Jones; it's a bit more ragged, it's a bit more honky toning and it's a whole lot more hillbilly, but there's not denying that his later work for Musicor as included on two previous Bear Family boxes -Walk Through This World With Me and A Good Year For The Roses - capture Jones at his absolute peak. Whilst I couldn't be more delighted to see my Bear Family George Jones shelf increase in size and the significance of these recordings cannot be underestimated, you do have to be a serious George Jones fan to want to fork out the money they want for this set. Musically it's hard to fault it but I can't help thinking that a thinner book and a 50% price cut would have made this a more attractive buy for many more people.

But if you've just cashed in your pension or had some luck on the lottery then fill your boots!