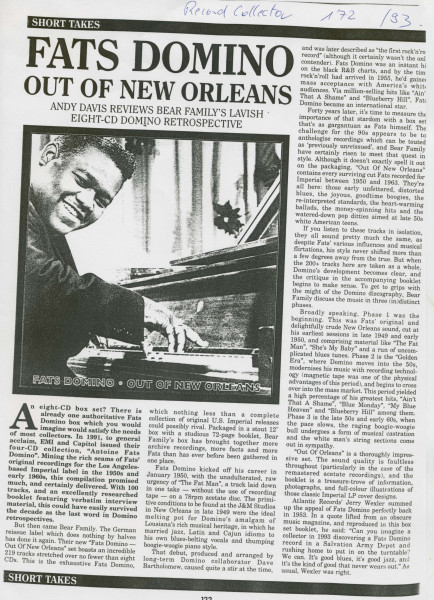 Aneight-CD box set? There is already one authoritative Fats Domino box which you would imagine would satisfy the needs of most collectors. In 1991, to general acclaim, EMI and Capitol issued their four-CD collection, "Antoine Fats Domino". Mining the rich seams of Fats' original recordings for the Los Angeles-based Imperial label in the 1950s and early 1960s, this compilation promised much, and certainly delivered. With 100 tracks, and an excellently researched booklet featuring verbatim interview material, this could have easily survived the decade as the last word in Domino retrospectives. But then came Bear Family. The German reissue label which does nothing by halves has done it again.

Their new "Fats Domino —Out Of New Orleans" set boasts an incredible 219 tracks stretched over no fewer than eight CDs. This is the exhaustive Fats Domino, which nothing less than a complete collection of original U.S. Imperial releases could possibly rival. Packaged in a stout 12" box with a studious 72-page booklet, Bear Family's box has brought together more archive recordings, more facts and more Fats than has ever before been gathered in one place. Fats Domino kicked off his career in January 1950, with the unadulterated, raw urgency of "The Fat Man", a track laid down in one take — without the use of recording tape — on a 78rpm acetate disc. The primi-tive conditions to be found at the J&M Studios in New Orleans in late 1949 were the ideal melting pot for Domino's amalgam of Lousiana's rich musical heritage, in which he married jazz, Latin and Cajun idioms to his own blues-belting vocals and thumping boogie-woogie piano style. That debut, produced and arranged by long-term Domino collaborator Dave Bartholomew, caused quite a stir at the time, and was later described as "the first rock'n'ro record" (although it certainly wasn't the onl contender).

Fats Domino was an instant hi on the black R&B charts, and by the tim rock'n'roll had arrived in 1955, he'd gaine( mass acceptance with America's whit, audiences. Via million-selling hits like "Ain' That A Shame" and "Blueberry Hill", Fat Domino became an international star. Forty years later, it's time to measure the importance of that stardom with a box set that's as gargantuan as Fats himself. The challenge for the 90s appears to be to anthologise recordings which can be touted as 'previously unreissued', and Bear Family have certainly risen to meet that quest in style. Although it doesn't exactly spell it out on the packaging, "Out Of New Orleans" contains every surviving cut Fats recorded for Imperial between 1950 and 1963. They're all here: those early unfettered, distorted blues, the joyous, goodtime boogies, the re-interpreted standards, the heart-warming ballads, the money-spinning hits and the watered-down pop ditties aimed at late 50s white American teens. If you listen to these tracks in isolation, they all sound pretty much the same, as despite Fats' various influences and musical flirtations, his style never shifted more than a few degrees away from the true.

But when the 200+ tracks here are taken as a whole, Domino's development becomes clear, and the critique in the accompanying booklet begins to make sense. To get to grips with the might of the Domino discography, Bear Family discuss the music in three (in)distinct phases. Broadly speaking, Phase 1 was the beginning. This was Fats' original and delightfully crude New Orleans sound, cut at his earliest sessions in late 1949 and early 1950, and comprising material like "The Fat Man", "She's My Baby" and a run of uncom-plicated blues tunes. Phase 2 is the "Golden Era", where Domino moves into the 50s, modernises his music with recording technol-ogy (magnetic tape was one of the physical advantages of this period), and begins to cross over into the mass market.

This period yielded a high percentage of his greatest hits, "Ain't That A Shame", "Blue Monday", "My Blue Heaven" and "Blueberry Hill" among them. Phase 3 is the late 50s and early 60s, when the pace slows, the raging boogie-woogie bull undergoes a form of musical castration and the white man's string sections come out in sympathy. "Out Of Orleans" is a thoroughly impres-sive set. The sound quality is faultless throughout (particularly in the case of the remastered acetate recordings), and the booklet is a treasure-trove of information, photographs, and full-colour illustrations of those classic Imperial LP cover designs. Atlantic Records' Jerry Wexler summed up the appeal of Fats Domino perfectly back in 1953.

In a quote lifted from an obscure music magazine, and reproduced in this box set booklet, he said: "Can you imagine a collector in 1993 discovering a Fats Domino record in a Salvation Army Depot and rushing home to put in on the turntable' We can. It's good blues, it's good jazz, am: it's the kind of good that never wears out." As usual, Wexler was right.