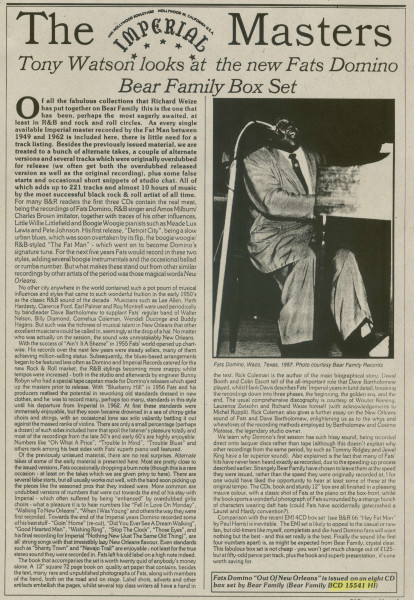 Of all the fabulous collections that Richard Weize has put together on Bear Family this is the one that has been, perhaps the most eagerly awaited, at least in R&B and rock and roll circles. As every single available Imperial master recorded by the Fat Man between 1949 and 1962 is included here, there is little need for a track listing.

Besides the previously issued material, we are treated to a bunch of alternate takes, a couple of alternate versions and several tracks which were originally overdubbed for release (we often get both the overdubbed released version as well as the original recording), plus some false starts and occasional short snippets of studio chat. All of which adds up to 221 tracks and almost 10 hours of music by the most successful black rock & roll artist of all time.

For many B&R readers the first three CDs contain the real meat, being the recordings of Fats Domino, R&B singer and Amos Milburn/ Charles Brown imitator, together with traces of his other influences, Little Willie Littlefield and Boogie Woogie pianists such as Meade Lux Lewis and Pete Johnson. His first release, "Detroit City", being a slow urban blues, which was soon overtaken by its flip, the boogie woogie/ R&B-styled "The Fat Man" - which went on to become Domino's signature tune. For the next five years Fats would record in these two styles, adding several boogie instrumentals and the occasional ballad or rumba number.

But what makes these stand out from other similar recordings by other artists of the period was those magical wordsNew Orleans. No other city anywhere in the world contained such a pot pourri of musical influences and styles that came to such wonderful fruition in the early 1950's as the classic R&B sound of the decade. Musicians such as Lee Allen. Herb Hardesty, Clarence Ford. Earl Palmer and Roy Montrell were used periodically by bandleader Dave Bartholomew to supplant Fats' regular band of Walter Nelson. Billy Diamond, Cornelius Coleman, Wendel' Duconge and Buddy Hagans. But such was the richness of musical talent in New Orleans that other excellent musicians could be called in, seemingly at the drop of a hat. No matter who was actually an the session, the sound was unmistakably New Orleans. With the success of "Ain't lt A Shame" in 1955 Fats' world opened up chart-wise.

His records over the next few years were steady sellers, many of them achieving million-selling status. Subsequently, the blues-based arrangements began to be featured less often as Domino and Imperial Records catered for the new Rock & Roll market, the R&B stylings becoming more snappy whilst tempos were increased - both in the studio and afterwards by engineer Bunny Robyn who had a special tape capstan made for Domino's releases which sped up the masters prior to release. With "Blueberry Hill" in 1956 Fats and his producers realised the potential in reworking old standards dressed in new clothes, and he was to record many, perhaps too many, standards in this style until his departure from Imperial in 1962. At first these standards were immensely enjoyable, but they soon became drowned in a sea of chirpy girlie choirs and strings, with an occasional lone sax solo valiantly battling it out against the massed ranks of violins. There are only a small percentage (perhaps a dozen) of such sides included here that spoil the listener's pleasure totally and most of the recordings from the late 50's and early 60's are highly enjoyable. Numbers like "Oh What A Price", "Trouble In Mind", "Trouble Blues" and others rank among his best sides with Fats' superb piano well featured. Of the previously unissued material, there are no real surprises. Alternate takes of some of the early material is presented here.

Most are pretty close to the issued versions, Fats occasionally droppinga bum note (though this is a rare occasion - at least on the takes which we are given privy to here). There are several false starts, but all usually works out well, with the band soon picking up the pieces like the seasoned pros that they indeed were. More common are undubbed versions of numbers that were cut towards the end of his stay with Imperial - which often suffered by being "enhanced" by overdubbed girlie choirs - what a pleasure it is to hear numbers like "Fell In Love On Monday", "Walking To New Orleans", "When I Was Young" and others the way they were first recorded. Towards the end of the Imperial years Domino recorded some of his best stuff - "Goin' Home" (re-cut), "Did You Ever See A Dream Walking", "Good Hearted Man", "Wishing Ring", "Stop The Clock", "Those Eyes", and his final recording for Imperial "Nothing New (Just The Same Old Thing)", are all strong songs with that irresistibly lazy New Orleans flavour. Even standards such as "Shanty Town" and "Navajo Trail" are enjoyable : not least for the true stereo sound they were recorded in. Fats left his old labet on a high note indeed. The book that accompanies the set is worth twenty quid of anybody's money alone. A 12" square 72 page book an quality art paper that contains, besides the text, many rare and unpublished photographs of Fats, along with members of the band, both an the road and on stage. Label shots, adverts and other artifacts embellish the pages, whilst several top class writers all have a hand in Fats Domino, Waco, Texas, 1957. Photo courtesy Bear Family Records the text.

Rick Coleman is the author of the main biographical David Booth and Colin Escott teil of the all-important role that Dave Bdrtholonww played, whilst Hank Davis describes Fats' Imperial years in lurid detail, brcakinq the recordings down into three phases, the beginning, the golden era, and the end, The usual comprehensive discography is courtesy of Wower Keesing, Laurence Zwisohn and Richard Weize himself (with acknowledgements to Michel Ruppli). Rick Coleman also gives a further essay on the New Orleans sound of Fats and Dave Bartholomew, enlightening us as to the whys and wherefores of the recording methods employed by Bartholomew and Cosimo Matassa, the legendary studio owner. We learn why Domino's first session has such hissy sound, being recorded direct onto lacquer discs rather than tape (although this doesn't explain why other recordings from the same period, by such as Tommy Ridgley and Jewel King have a far superior sound). Also explained is the fact that many of Fats' hits have never been heard exactly as recorded, due to the speeding-up process described earlier. Strangely Bear Family have chosen to leave them at the speed they were issued, rather than the speed they were originally recorded at, I for one would have liked the opportunity to hear at least some of these at the original tempo, The CDs, book and sturdy 12" box are all finished in a pleasing mauve colour, with a classic shot of Fats at the piano an the box-front, whilst the book sports a wonderful photograph of Fats surrounded by a strange bunch of characte5 wearing daft hats (could Fats have accidentally gatecrashed a Laurel and Hardy convention?).

Comparison with the recent EMI 4CD box set (see B&R 66 "Hey Fat Mn'a by Paul Harris) is inevitable. The EMI set is likely to appeal to the casual or new fan, but old-timers like myself, completists and die-hard Domino fans will wart nothing but the best - and this set really is the best. Finally the sound (the first four numbers apart) is, as might be expected from Bear Family, crystal clear. This fabulous box set is not cheap - you won't get muck change out of £125 -but at fifty-odd pence per track, plus the book and superb presentation, it's one worth saving for. Fats Domino "Out Of New Orleans" is issued on an eight CD box set by Bear Family (Bear Family BCD 15541 HI)