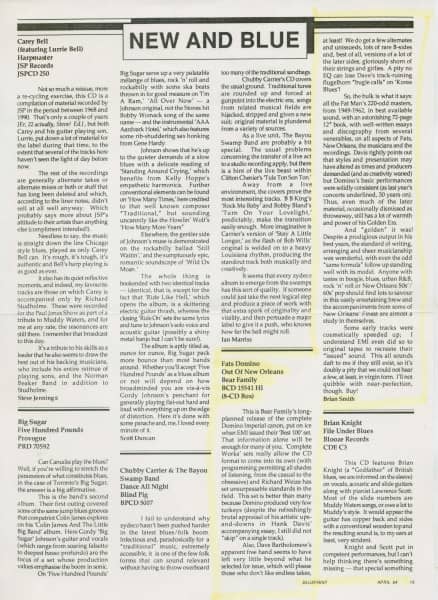 This is Bear Family's long-planned release of the complete Domino Imperial canon, put on ice when EMI issued their 'Best 100' set. That information alone will be enough for many of you. 'Complete Works' sets really allow the CD format to come into its own (with programming permitting all shades of listening, from the casual to the obsessive) and Richard Weize has set unsurpassable standards in the field.

This set is better than many because Domino produced very few turkeys (despite the refreshingly brutal appraisal of his artistic ups-and-downs in Hank Davis' accompanying essay, I still did not "skip" on a single track): Also, Dave Bartholomew's apparent free hand seems to have left very little beyond what he selected for issue, which will please those who don't like endless takes, at least! We do get a few altemates and unissueds, lots of rare B-sides and, best of all, versions of a lot of the later sides, gloriously shorn of their strings and girlies.

A pity no EQ can lose Dave's track-ruining flugelhom "bugle calls" on 'Korea Blues'! So, the bulk is what it says: all the Fat Man's 220-odd masters, from 1949-1962, in best available sound, with an astonishing 72-page 12' book, with well-written essays and discography from several venerables, on all aspects of Fats, New Orleans, the musicians and the recordings. Davis rightly points out that styles and presentation may have altered as times and producers demanded (and as creativity waned) but Domino's basic performances were solidly consistent (as last year's concerts underlined, 30 years on). Thus, even much of the later material, occasionally dismissed as throwaway, still has a lot of warmth and power of his Golden Era. And "golden" it was!

Despite a prodigious output in his best years, the standard of writing, arranging and sheer musicianship was wonderful, with even the odd "same formula" follow up standing well with its model. Anyone with tastes in boogie, blues, urban R&B, rock 'n' roll or New Orleans 50s'/ 60s' pop should find lots to savour in this vastly entertaining brew and the accompaniments from some of New Orleans' Finest are almost a study in themselves. Some early tracks were cosmetically speeded up; I understand EMI even did so to original tapes to recreate their "issued" sound.

This all sounds daft to me if they still exist, so it's doubly a pity that we could not hear a few, at least, in virgin form. I'll not quibble with near-perfection, though.
Buy! Brian Smith