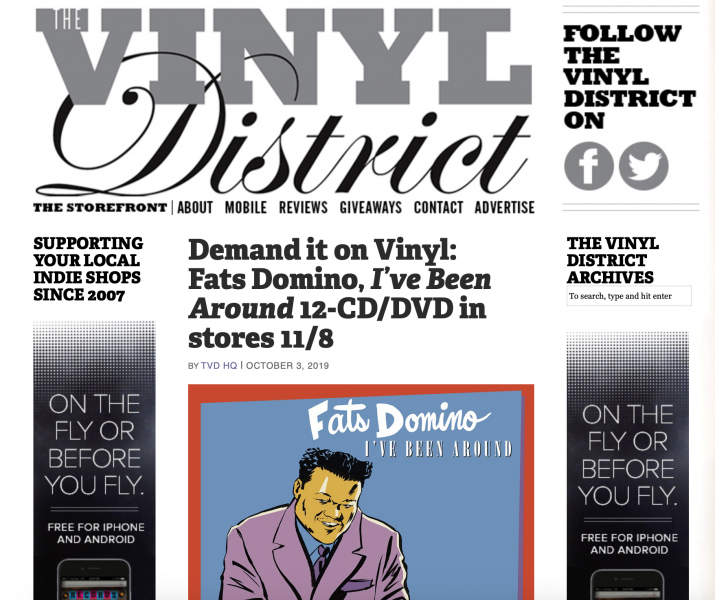 VIA PRESS RELEASE | All the singer-pianist’s defining work for Imperial and ABC-Paramount is compiled on comprehensive 12-CD/1-DVD collection.

Bear Family Records, the international gold standard for excellence in music reissues, offers the most in-depth look yet available at the groundbreaking R&B and rock ’n’ roll hits of the pioneering New Orleans singer-pianist Fats Domino in its new box set I’ve Been Around, to be released November 8, 2019. The monumental collection contains 312 tracks comprising all the Crescent City titan’s work for Imperial Records, for which he cut his first and greatest hits from 1948-1962, and ABC-Paramount Records, his recording home from 1963-65. A motherlode of originally unreleased alternate takes, undubbed and unedited masters, and newly discovered instrumental backing tracks, is included.

Domino (1928-2017) was the first major artist to explode off the R&B charts and into the teenage consciousness during the 1950s. He made his mark both as a session pianist behind Big Joe Turner, Lloyd Price, and Smiley Lewis (whose work backed by the keyboardist is heard on I’ve Been Around) and as a star in his own right, notching hit after hit with his sunny vocalizing and romping, rolling work on the 88s.

He changed American music in the process by crafting universally popular songs that bridged the then seemingly vast chasm between African-American and white audiences. New Orleans bandleader Dave Bartholomew called him the “cornerstone” of rock ’n’ roll.

As biographer Rick Coleman noted in Blue Monday: Fats Domino and the Lost Dawn of Rock ’n’ Roll, the musician “[stepped] beyond blues and jazz to the crossroads of a new, wider world that he would help create both musically and socially.” In 1986 he was one of the 10 inaugural inductees in the Rock and Roll Hall of Fame.

All 61 of Domino’s R&B chart hits — nine of which soared to No. 1, and all but five of which reached the national top 25 — are heard on the set’s 12 CDs. They include the pop crossovers (37 of which entered the national top 40) that made him a household name — among them “Ain’t It a Shame,” “I’m in Love Again,” “Blue Monday,” and “I’m Walkin’.” His signature 1956 smash “Blueberry Hill” (No. 1 R&B, No. 2 pop), whose original studio master was badly damaged, is presented in pristine form in the box, remastered from a clean original 78 copy.

I’ve Been Around — enlarging upon and superseding Bear Family’s original, eight-CD 1993 Domino set Out of New Orleans, which did not contain the ABC-Paramount sides — offers completely remastered renderings of all the recordings. Of particular interest to collectors will be speed-corrected versions of 11 tracks that were artificially sped up for release as singles during the ’50s, to make the vocalist sound more “youthful,” by Imperial mastering engineer Abraham “Bunny” Robyn; these are heard in both their original and newly corrected form.

The collection also contains a DVD including both the 60-minute broadcast version and the 90-minute director’s cut of the 2016 PBS American Masters documentary Fats Domino and the Birth of Rock ’n’ Roll. The film — which includes interviews with the late Dave Bartholomew and Crescent City engineer and studio owner Cosimo Matassa — was directed by Joe Lauro and written by Lauro and Rick Coleman.

Befitting the wide, deep scope of the set and reflecting Bear Family’s longstanding commitment to quality presentation, I’ve Been Around includes a full-color, hardcover, large-format book of 240 pages. It contains updated and extended notes by biographer Coleman; track-by-track commentary by producers Hank Davis and Scott Parker (who have been involved in more than 50 Bear Family projects); a comprehensive Domino Imperial sessionography and the most complete ABC-Paramount discography available to date; and many previously unpublished images.

In its dimensions and clothbound elegance, the box replicates the packaging of two previously released, widely acclaimed Bear Family boxes devoted to a pair of Domino’s fellow inaugural Rock Hall inductees: Chuck Berry’s Rock and Roll Music Any Old Way You Choose It, which compiled the singer-songwriter-guitarist’s complete studio recordings, and Jerry Lee Lewis’ What the Hell Else Do You Need?, the most extensive collection ever produced of the singer-pianist’s Sun Records material.