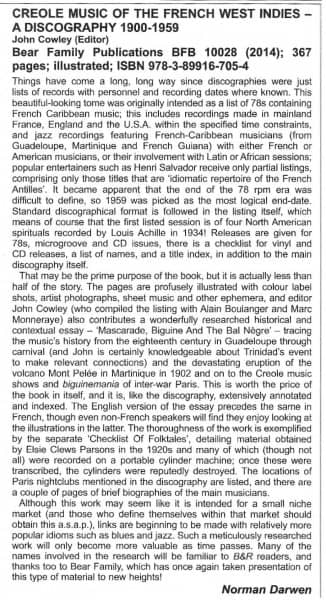 Things have come a long, long way since discographies were just lists of records with personnel and recording dates where known. This beautiful-looking tome was originally intended as a list of 78s containing French Caribbean music; this includes recordings made in mainland France, England and the U.S.A. within the specified time constraints, and jazz recordings featuring French-Caribbean musicians (from Guadeloupe, Martinique and French Guiana) with either French or American musicians, or their involvement with Latin or African sessions; popular entertainers such as Henri Salvador receive only partial listings, comprising only those titles that are 'idiomatic repertoire of the French Antilles". It became apparent that the end of the 78 rpm era was difficult to define, so 1959 was picked as the most logical end-date. Standard discographical format is followed in the listing itself, which means of course that the first listed session is of four North American spirituals recorded by Louis Achille in 1934! Releases are given for 78s, microgroove and CD issues, there is a checklist for vinyl and CD releases, a list of names, and a title index, in addition to the main discography itself. That may be the prime purpose of the book, but it is actually less than half of the story. The pages are profusely illustrated with colour label shots, artist photographs, sheet music and other ephemera, and editor John Cowley (who compiled the listing with Alain Boulanger and Marc lvlonneraye) also contributes a wonderfully researched historical and contextual essay — 'Mascarade. Biguine And The Bat Negro' — tracing the music's history from the eighteenth century in Guadeloupe through carnival (and John is certainly knowledgeable about Trinidad's event to make relevant connections) and the devastating eruption of the volcano Mont Pelee in Martinique in 1902 and on to the Creole music shows and biguinemania of inter-war Paris_ This is worth the price of the book in itself, and it is, like the discography, extensively annotated and indexed. The English version of the essay precedes the same in French, though even non-French speakers will find they enjoy looking at the illustrations in the latter. The thoroughness of the work is exemplified by the separate 'Checklist Of Folktales', detailing material obtained by Elsie Clews Parsons in the 1920s and many of which (though not all) were recorded on a portable cylinder machine; once these were transcribed, the cylinders were reputedly destroyed. The iocations of Paris nightclubs mentioned in the discography are listed, and there are a couple of pages of brief biographies of the main musicians, Although this work may seem like it is intended for a small niche market (and those who define themselves within that market should obtain this a.s.a.p.), links are beginning to be made with relatively more popular idioms such as blues and jazz. Such a meticulously researched work will only become more valuable as time passes. Many of the names involved in the research will be familiar to a&R readers, and thanks too to Bear Family, which has once again taken presentation of this type of material to new heights!
Norman Darwen