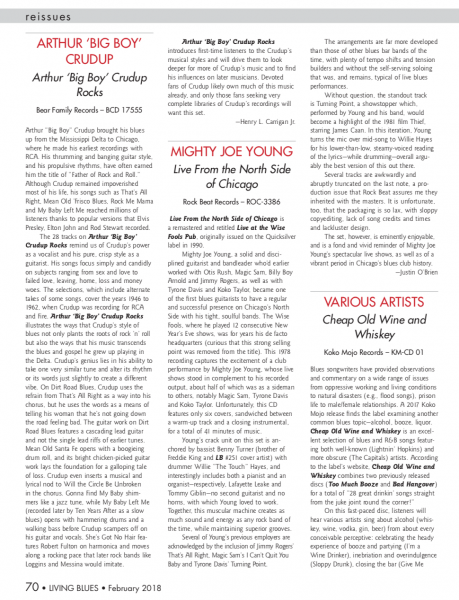 Arthur “Big Boy” Crudup brought his blues up from the Mississippi Delta to Chicago, where he made his earliest recordings with RCA. His thrumming and banging guitar style, and his propulsive rhythms, have often earned him the title of “Father of Rock and Roll.” Although Crudup remained impoverished most of his life, his songs such as That’s All Right, Mean Old ’Frisco Blues, Rock Me Mama and My Baby Left Me reached millions of listeners thanks to popular versions that Elvis Presley, Elton John and Rod Stewart recorded.

The 28 tracks on Arthur ‘Big Boy’ Crudup Rocks remind us of Crudup’s power as a vocalist and his pure, crisp style as a guitarist. His songs focus simply and candidly on subjects ranging from sex and love to failed love, leaving, home, loss and money woes. The selections, which include alternate takes of some songs, cover the years 1946 to 1962, when Crudup was recording for RCA and Fire. Arthur ‘Big Boy’ Crudup Rocks illustrates the ways that Crudup’s style of blues not only plants the roots of rock ’n’ roll but also the ways that his music transcends the blues and gospel he grew up playing in the Delta. Crudup’s genius lies in his ability to take one very similar tune and alter its rhythm or its words just slightly to create a different vibe. On Dirt Road Blues, Crudup uses the refrain from That’s All Right as a way into his chorus, but he uses the words as a means of telling his woman that he’s not going down the road feeling bad. The guitar work on Dirt Road Blues features a cascading lead guitar and not the single lead riffs of earlier tunes. Mean Old Santa Fe opens with a boogieing drum roll, and its bright chicken-picked guitar work lays the foundation for a galloping tale of loss. Crudup even inserts a musical and lyrical nod to Will the Circle Be Unbroken
in the chorus. Gonna Find My Baby shim- mers like a jazz tune, while My Baby Left Me (recorded later by Ten Years After as a slow blues) opens with hammering drums and a walking bass before Crudup scampers off on his guitar and vocals. She’s Got No Hair fea- tures Robert Fulton on harmonica and moves along a rocking pace that later rock bands like Loggins and Messina would imitate.

introduces rst-time listeners to the Crudup’s musical styles and will drive them to look deeper for more of Crudup’s music and to nd his in uences on later musicians. Devoted fans of Crudup likely own much of this music already, and only those fans seeking very complete libraries of Crudup’s recordings will want this set.