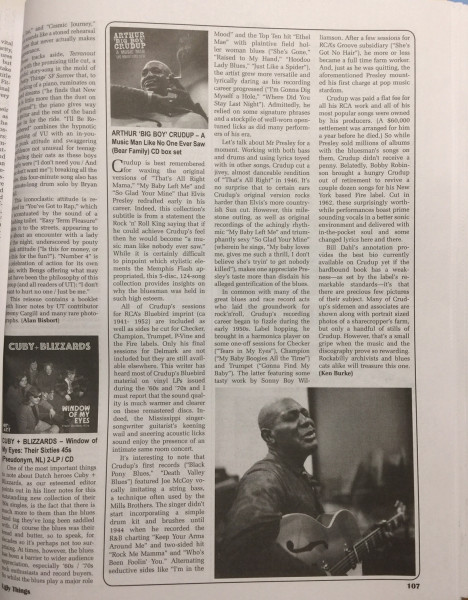 ARTHUR 'BIG BOY' CRUDUP - A Music Man Like No One Ever Saw (Bear Family) CD box set Crudup is best remembered for waxing the original versions of "That's All Right Mama," "My Baby Left Me" and "So Glad Your Mine" that Elvis Presley redrafted early in his career. Indeed, this collection's subtitle is from a statement the Rock .11' Roll King saying that if he could achieve Crudup's feel then he would become "a mu-sic man like nobody ever saw" While it is certainly difficult to pinpoint which stylistic ele-ments the Memphis Flash ap-propriated, this 5-disc, 124-song collection provides insights on why the bluesman was held in such high esteem.

All of Crudup's sessions for RCA5 Bluebird imprint (ca 1941- 1952) are included as well as sides he cut for Checker, Champion, Trumpet, P-Vine and the Fire labels. Only his final sessions for Delmark are not included but they me still avail-able elsewhere. This writer has heard most of Crudup's Bluebird material on vinyl LPs issued during the '60s and '700 and I must report that the sound qual-ity is much warmer and clearer on these remastered discs. In-deed, the Mississippi singer-songwriter guitarist's keening wail and sneering acoustic licks sound enjoy the presence of an intimate same room concert. It's interesting to note that Crudup's first records ("Black Pony Blues," "Death Valley Blues") featured Joe McCoy vo-cally imitating a string bass, a technique often used by the Mills Brothers. The singer didn't start incorporating a simple drum kit and brushes until 1944 when he recorded the RaB charting "Keep Your Arms Around Me" and two-sided hit "Rock Me Mamma" and "Who's Been Foolin' You." Alternating seductive sides like "I'm in the Mood" and the Top Ten hit "Ethel Mae" with plaintive field hol-ler woman blues ("She's Gone," "Raised to My Hand," "Hoodoo Lady Blues," '7ust Like a Spide•), the artist grew more versatile and lyrically daring as his recording career progressed ("I'm Gonna Dig Myself a Hole," "Where Did You Stay Last Night").

Admittedly, he relied on some signature phrases and a stockpile of well-worn open-tuned licks as did many perform-ers of his era. Let's talk about Mr Presley for a moment. Working with both bass and drums and using lyrics toyed with in other songs, Crudup cut a jivey, almost danceable rendition of "That's All Right" in 1946. It's no surprise that to certain ears Crudup's original version rocks harder than Elvis's more country-ish Sun cut. However, this mile-stone outing, as well as original recordings of the achingly rhyth-mic "My Baby Left Me" and trium-phantly sexy "So Glad Your Mine" (wherein he sings, "My baby loves me, gives me such a thrill, I don't believe she's tryin' to get nobody killed"), makes one appreciate Pre-sley's taste more than disdain his alleged gentrification of the blues. In common with many of the great blues and race record acts who laid the groundwork for rock'n'roll, Crudup's recording career began to fizzle during the early 1950s. Label hopping, he brought in a harmonica player on some one-off sessions for Checker Clears in My Eyes"), Champion ("My Baby Boogies All the Time") and Trumpet ("Gonna Find My Baby"). The latter featuring some tasty work by Sonny Boy Williamson.

After a few sessions for RCAs Groove subsidiary ("She's Got No HMO, he more or less became a full time farm worker. And, just as he was quitting, the aforementioned Presley mount-ed his first charge at pop music stardom. Crudup was paid a flat fee for all his RCA work and all of his most popular songs were owned by his producers. (A $60,000 settlement was arranged for him a year before he died.) So while Presley sold millions of albums with the bluesman's songs on them, Crudup didn't receive a penny. Belatedly, Bobby Robin-son brought a hungry Crudup out of retirement to revive a couple dozen songs for his New York based Fire label. Cut in 1962, these surprisingly worth-while performances boast prime sounding vocals in a better sonic environment and delivered with in-the-pocket soul and some changed lyrics here and there. Bill Dahl's annotation pro-vides the best bio currently available on Crudup yet if the hardbound book has a weak-ness—as set by the label's re-markable standards—it's that there are precious few pictures of their subject. Many of Crud-up's sidemen and associates are shown along with portrait sized photos of a sharecropper's farm, but only a handful of stills of Crudup. However, that's a small gripe when the music and the discography prove so rewarding. Rockabilly archivists and blues cats alike will treasure this one. Wert Burke)