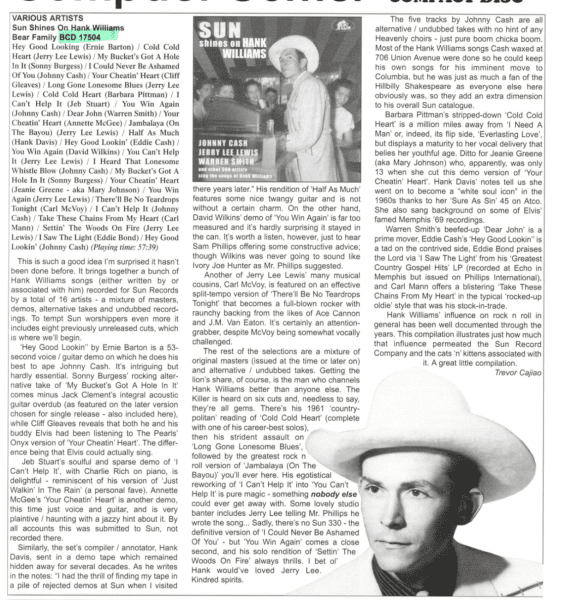 VARIOUS ARTISTS Sun Shines On Hank Williams Bear Family BCD 17504 This is such a good idea I'm surprised it hasn't been done before. It brings together a bunch of Hank Williams songs (either written by or associated with him) recorded for Sun Records by a total of 16 artists - a mixture of masters, demos, alternative takes and undubbed record-ings. To tempt Sun worshippers even more it includes eight previously unreleased cuts, which is where well begin. 'Hey Good Lookin" by Ernie Barton is a 53-second voice / guitar demo on which he does his best to ape Johnny Cash. It's intriguing but hardly essential.

Sonny Burgess' rocking alter-native take of 'My Bucket's Got A Hole In It' comes minus Jack Clement's integral acoustic guitar overdub (as featured on the later version chosen for single release - also included here), while Cliff Gleaves reveals that both he and his buddy Elvis had been listening to The Pearls' Onyx version of 'Your Cheatin' Heart'. The differ-ence being that Elvis could actually sing. Jeb Stuart's soulful and sparse demo of 'I Can't Help It', with Charlie Rich on piano, is delightful - reminiscent of his version of 'Just Walkin' In The Rain' (a personal fave). Annette McGee's 'Your Cheatin' Heart' is another demo, this time just voice and guitar, and is very plaintive / haunting with a jazzy hint about it. By all accounts this was submitted to Sun. not recorded there. Similarly, the set's compiler / annotator, Hank Davis, sent in a demo tape which remained hidden away for several decades. As he writes in the notes: "I had the thrill of finding my tape in a pile of rejected demos at Sun when I visited there years later."

His rendition of 'Half As Much' features some nice twangy guitar and is not without a certain charm. On the other hand, David Wilkins' demo of 'You Win Again' is far too measured and it's hardly surprising it stayed in the can. It's worth a listen, however, just to hear Sam Phillips offering some constructive advice; though Wilkins was never going to sound like Ivory Joe Hunter as Mr. Phillips suggested. Another of Jerry Lee Lewis' many musical cousins, Carl McVoy, is featured on an effective split-tempo version of 'There'll Be No Teardrops Tonight' that becomes a full-blown rocker with raunchy backing from the likes of Ace Cannon and J.M. Van Eaton. It's certainly an attention-grabber, despite McVoy being somewhat vocally challenged.

The rest of the selections are a mixture of original masters (issued at the time or later on) and alternative / undubbed takes. Getting the lion's share, of course, is the man who channels Hank Williams better than anyone else. The Killer is heard on six cuts and, needless to say, they're all gems. There's his 1961 'country-politan' reading of 'Cold Cold Heart' (complete with one of his career-best solos), then his strident assault on 'Long Gone Lonesome Blues', followed by the greatest rock n roll version of 'Jambalaya (On The Bayou)' you'll ever here. His egotistical reworking of 'I Can't Help It' into 'You Can't Help It' is pure magic - something nobody else could ever get away with. Some lovely studio banter includes Jerry Lee telling Mr. Phillips he wrote the song... Sadly. there's no Sun 330 - the definitive version of 'I Could Never Be Ashamed Of You' - but 'You Win Again' comes a close second, and his solo rendition of 'Settin' The Woods On Fire' always thrills. I bet of Hank would've loved Jerry Lee. Kindred spirits.

The five tracks by Johnny Cash are all alternative / undubbed takes with no hint of any Heavenly choirs - just pure boom chicka boom. Most of the Hank Williams songs Cash waxed at 706 Union Avenue were done so he could keep his own songs for his imminent move to Columbia, but he was just as much a fan of the Hillbilly Shakespeare as everyone else here obviously was. so they add an extra dimension to his overall Sun catalogue. Barbara Pittman's stripped-down 'Cold Cold Heart' is a million miles away from 'I Need A Man' or, indeed. its flip side, 'Everlasting Love', but displays a maturity to her vocal delivery that belies her youthful age. Ditto for Jeanie Greene (aka Mary Johnson) who, apparently, was only 13 when she cut this demo version of 'Your Cheatin' Heart'. Hank Davis' notes tell us she went on to become a "white soul icon" in the 1960s thanks to her 'Sure As Sin' 45 on Atco.

She also sang background on some of Elvis' famed Memphis '69 recordings. Warren Smith's beefed-up 'Dear John' is a prime mover, Eddie Cash's 'Hey Good Lookin" is a tad on the contrived side, Eddie Bond praises the Lord via 'I Saw The Light' from his 'Greatest Country Gospel Hits' LP (recorded at Echo in Memphis but issued on Phillips International). and Carl Mann offers a blistering 'Take These Chains From My Heart' in the typical 'rocked-up oldie' style that was his stock-in-trade. Hank Williams' influence on rock n roll in general has been well documented through the years.

This compilation illustrates just how much that influence permeated the Sun Record Company and the cats 'n' kittens associated with it.
A great little compilation. Trevor Cajiao