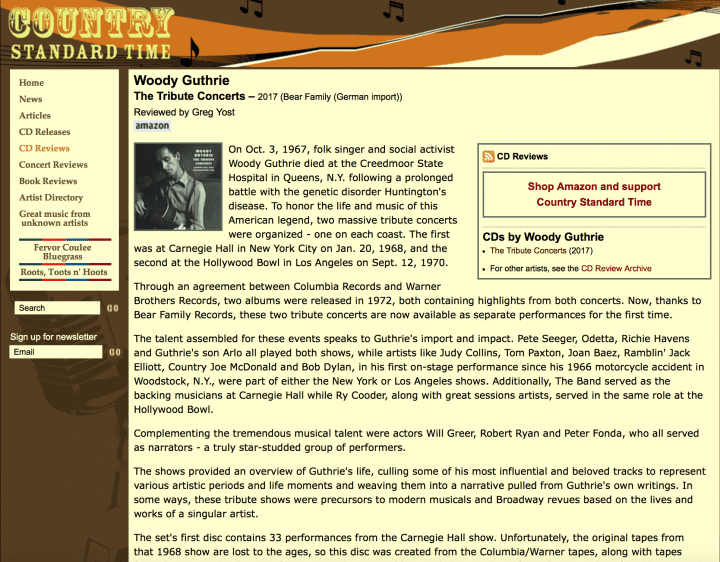 On Oct. 3, 1967, folk singer and social activist Woody Guthrie died at the Creedmoor State Hospital in Queens, N.Y. following a prolonged battle with the genetic disorder Huntington's disease. To honor the life and music of this American legend, two massive tribute concerts were organized - one on each coast. The first was at Carnegie Hall in New York City on Jan. 20, 1968, and the second at the Hollywood Bowl in Los Angeles on Sept. 12, 1970.

Through an agreement between Columbia Records and Warner Brothers Records, two albums were released in 1972, both containing highlights from both concerts. Now, thanks to Bear Family Records, these two tribute concerts are now available as separate performances for the first time.

The talent assembled for these events speaks to Guthrie's import and impact. Pete Seeger, Odetta, Richie Havens and Guthrie's son Arlo all played both shows, while artists like Judy Collins, Tom Paxton, Joan Baez, Ramblin' Jack Elliott, Country Joe McDonald and Bob Dylan, in his first on-stage performance since his 1966 motorcycle accident in Woodstock, N.Y., were part of either the New York or Los Angeles shows. Additionally, The Band served as the backing musicians at Carnegie Hall while Ry Cooder, along with great sessions artists, served in the same role at the Hollywood Bowl.

Complementing the tremendous musical talent were actors Will Greer, Robert Ryan and Peter Fonda, who all served as narrators - a truly star-studded group of performers.

The shows provided an overview of Guthrie's life, culling some of his most influential and beloved tracks to represent various artistic periods and life moments and weaving them into a narrative pulled from Guthrie's own writings. In some ways, these tribute shows were precursors to modern musicals and Broadway revues based on the lives and works of a singular artist.

The set's first disc contains 33 performances from the Carnegie Hall show. Unfortunately, the original tapes from that 1968 show are lost to the ages, so this disc was created from the Columbia/Warner tapes, along with tapes from the personal collection of concert producer Harold Leventhal. Recordings from the 1970 show fared better, and 45 tracks from that night are preserved in this box set. Included throughout are a whopping 20 tracks - both musical performances and bonus interviews - that have never been released before.

Of note are the three Dylan performances from the Carnegie Hall show. Dylan is backed by The Band on "I Ain't Got No Home," "Dear Mr. Roosevelt" and a raucous, piano-driven take on "Grand Coulee Dam," which could have been a Basement Tapes outtake. These overtly rock tracks standout amidst an evening of mostly folk songs.

Given that these recordings are nearly a half-century old, they sound terrific. Vocals are clear, instruments are not lost in ambient room noise, and crowd reactions are appropriate without being disruptive. Early on the first disc, Ryan's narration is interrupted by an audience member imploring him to speak louder, which Ryan immediately obliges. That little moment, which puts the listener in that Carnegie Hall audience, is an example of the quality of these old recordings.