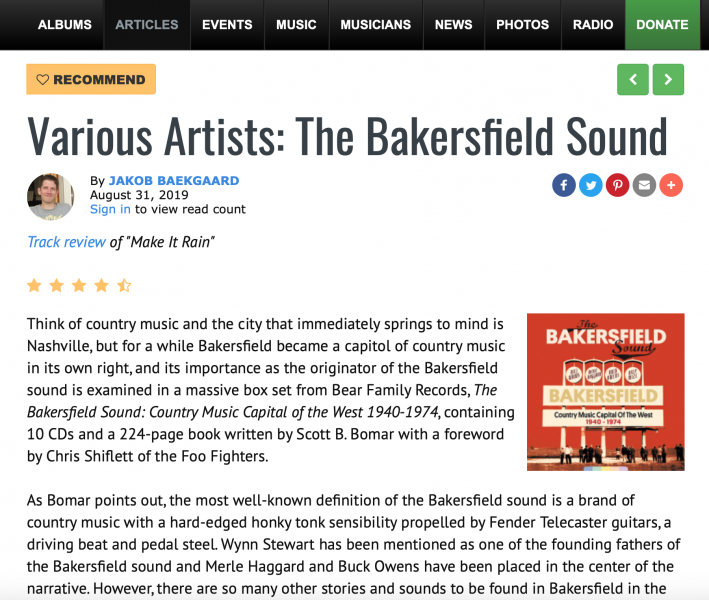 As Bomar points out, the most well-known definition of the Bakersfield sound is a brand of country music with a hard-edged honky tonk sensibility propelled by Fender Telecaster guitars, a driving beat and pedal steel. Wynn Stewart has been mentioned as one of the founding fathers of the Bakersfield sound and Merle Haggard and Buck Owens have been placed in the center of the narrative. However, there are so many other stories and sounds to be found in Bakersfield in the period between 1940 and 1974 that the box covers. Among the many interesting artists are one of the unsung heroes of Bakersfield, Billy Mize, who was portrayed in William J. Saunders' documentary Billy Mize & the Bakersfield Sound (2014).

Mize's composition "Make It Rain" (1969) shows up on the box and is a good example of the diversity and depth of the Bakersfield sound. The song reached the number 40 spot on the US country chart and was covered by Dean Martin and Ray Price. It's a sophisticated homage to the working man with the difference between rich and poor entwined in the complex economy of love, as the singer sings of his rich girl friend: "While you're playin' with my mind / I'll be payin' with your money, honey / As long as your account can stand the drain." It's a theme that harks back to Lefty Frizzell's "If You Got the Money I've Got the Time," but now embedded in class-conscience.

Musically, the song has a strong resemblance to John Hartford's "Gentle on My Mind" (1967) that was famously covered by Glen Campbell. Mize's song has a catchy shuffling beat, light jazz guitar figures and a sound peppered with organ, harmonica and choir. It's a sound that doesn't quite fit the stereotype of the Bakersfield sound and instead of narrowing the picture of what the Bakersfield sound was, this impressive and well-researched box opens the vistas of the music with a wide scope that is fitting of the West.

A Note: Potential customers should be aware that Bear Family has informed buyers of the box that eight Merle Haggard songs have been removed from the box because of legal claims. The listed missing songs are unreleased Tally versions of "If I Had Left It Up to You" and "I'm Gonna Break Every Heart I Can," two false starts and a false start and take 4 of "If I Had Left It Up To You," demo versions of "I'm Not Looking For An Angel" and "Second Fiddle" with Johnny Barnett and a live performance of "I Saw Mommy Kissing Santa Claus." The information slip that comes with the box is also a voucher for 10% off a future Bear Family purchase.