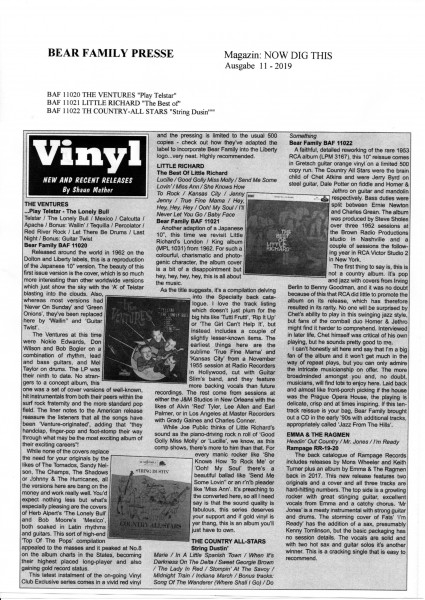 LITTLE RICHARD The Best Of Little Richard Lucille / Good Golly Miss Molly/ Send Me Some Lovin'/ Miss Ann / She Knows How To Rock / Kansas City / Jenny Jenny / True Fine Mama / Hey, Hey, Hey, Hey / Ooh! My Soul / Never Let You Go / Baby Face Bear Family BAF 11021 Another adaption of a Japanese 10", this time we revisit Little Richard's London / King album (MPL 1031) from 1962. For such a colourful, charismatic and photo-genic character, the album cover is a bit of a disappointment but hey, hey, hey, hey, this is all about

Something Bear Family BAF 11022 A faithful, detailed reworking of the rare 1953 RCA album (LPM 3167), this 10" reissue comes in Gretsch guitar orange vinyl on a limited 500 copy run. The Country All Stars were the brain child of Chet Atkins and were Jerry Byrd on steel guitar, Dale Potter on fiddle and Homer & Jethro on guitar and mandolin the music. As the title suggests, it's a compilation delving into the Specialty back catalogue. I love the track listing which doesn't just plum for the big hits like 'Tutti Frutti', 'Rip It Up' or 'The Girl Can't Help It', but instead includes a couple of slightly lesser-known items. The earliest things here are the sublime 'True Fine Mama' and 'Kansas City' from a November 1955 session at Radio Recorders in Hollywood. cut with Guitar Slim's band, and they feature more backing vocals than future recordings.

The rest come from sessions at either the J&M Studios in New Orleans with the likes of Alvin 'Red' Tyler, Lee Allen and Earl Palmer, or in Los Angeles at Master Recorders with Grady Gaines and Charles Conner. While Joe Public thinks of Little Richard's sound as the piano-driving rock n roll of 'Good Golly Miss Molly' or 'Lucille', we know, as this comp shows, there's more to him than that. For every manic rocker like 'She Knows How To Rock Me' or 'Ooh! My Soul' there's a beautiful ballad like 'Send Me Some Lovin" or an r'n'b pleader like 'Miss Ann'. It's preaching to the converted here, so all I need say is that the sound quality is fabulous, this series deserves your support and if gold vinyl is yer thang, this is an album you'll just have to own.