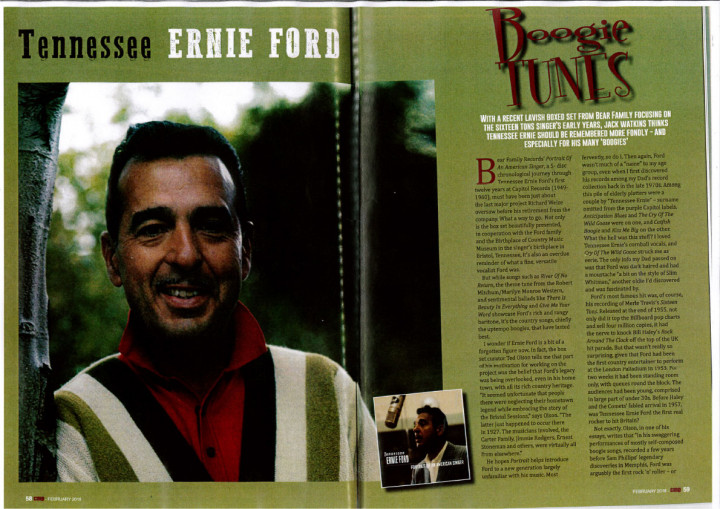 WITH A RECENT LAVISH BOXED SET FROM BEAR FAMILY FOCUSING ON THE SIXTEEN TONS SINGER'S EARLY YEARS, JACK WATKINS THINKS TENNESSEE ERNIE SHOULD BE REMEMBERED MORE FONDLY - AND ESPECIALLY FOR HIS MANY 'BOOGIES'
Bear Family Records' Portrait Of An American Singer, a 5- disc chronological journey through Tennessee Ernie Ford's first twelve years at Capitol Records (1949-1960), must have been just about the last major project Richard Weize oversaw before his retirement from the company. What a way to go. Not only is the box set beautifully presented, in cooperation with the Ford family and the Birthplace of Country Music Museum in the singer's birthplace in Bristol, Tennessee, it's also an overdue reminder of what a fine, versatile vocalist Ford was. But while songs such as River Of No Return, the theme tune from the Robert Mitchum/Marilyn Monroe Western, and sentimental ballads like There Is Beauty In Everything and Give Me Your Word showcase Ford's rich and rangy baritone, it's the country songs, chiefly the uptempo boogies, that have lasted best. I wonder if Ernie Ford is a bit of a forgotten figure now. In fact, the box set curator Ted Olson tells me that part of his motivation for working on the project was the belief that Ford's legacy was being overlooked, even in his home town, with all its rich country heritage. "It seemed unfortunate that people there were neglecting their hometown legend while embracing the story of the Bristol Sessions," says Olson. The latter just happened to occur there in 1927. The musicians involved, the Carter Family, Jimmie Rodgers, Ernest Stoneman and others, were virtually all from elsewhere." He hopes Portrait helps introduce Ford to a new generation largely unfamiliar with his music. Most

fervently, so do 1. Then again, Ford wasn't much of a "name" to my age group, even when I first discovered his records among my Dad's record collection back in the late 1970s. Among this pile of elderly platters were a couple by "Tennessee Ernie" - surname omitted from the purple Capitol labels. Anticipation Blues and The Cry Of The Wild Goose were on one, and Catfish Boogie and Kiss Me Big on the other. What the hell was this stuff? I loved Tennessee Ernie's cornball vocals, and Cry Of The Wild Goose struck me as eerie. The only info my Dad passed on was that Ford was dark haired and had a moustache "a bit on the style of Slim Whitman," another oldie I'd discovered and was fascinated by. Ford's most famous hit was, of course, his recording of Merle Travis's Sixteen Tons. Released at the end of 1955, not only did it top the Billboard pop charts and sell four million copies, it had the nerve to knock Bill Haley's Rock Around The Clock off the top of the UK hit parade. But that wasn't really so surprising, given that Ford had been the first country entertainer to perform at the London Palladium in 1953. For two weeks it had been standing room only, with queues round the block. The audiences had been young, comprised in large part of under 30s. Before Haley and the Comets' fabled arrival in 1957, was Tennessee Ernie Ford the first real rocker to hit Britain? Not exactly. Olson, in one of his essays, writes that in his swaggering performances of mostly self-composed boogie songs, recorded a few years before Sam Phillips' legendary discoveries in Memphis, Ford was arguably the first rock 'n' roller - or