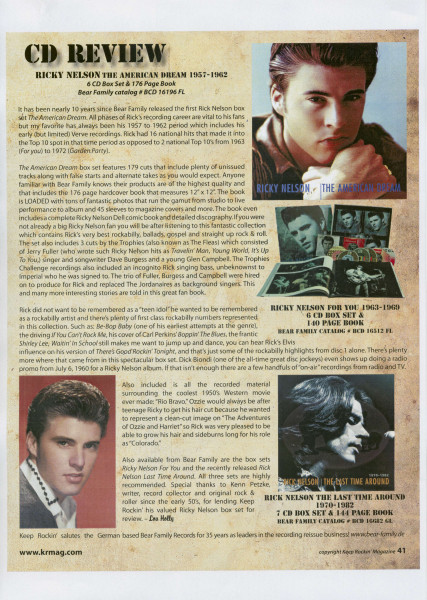 lt has been nearly 10 years since Bear Family released the first Rick Nelson box set The American Dream. All phases of Rick's recording career are vital to his fans but my favorite has always been his 1957 to 1962 period which includes his early (but limited) Verve recordings. Rick had 16 national hits that made it into the Top 10 spot in that time period as opposed to 2 national Top 10's from 1963 (For you) to 1972 (Garden Party).

The American Dream box set features 179 cuts that include plenty of unissued tracks along with false starts and alternate takes as you would expect. Anyone familiar with Bear Family knows their products are of the highest quality and that includes the 176 page hardcover book that measures 12" x 12". The book is LOADED with tons of fantastic photos that run the gamut from studio to live performance to album and 45 sleeves to magazine covers and more.

The book even includesa complete Ricky Nelson Dell comic book and detailed discography. If you were not already a big Ricky Nelson fan you will be after listening to this fantastic collection which contains Rick's very best rockabilly, ballads, gospel and straight up rock & roll. The set also includes 3 cuts by the Trophies (also known as The Fleas) which consisted of Jerry Fuller (who wrote such Ricky Nelson hits as Travelin' Man, Young World, lt's Up To You,) singer and songwriter Dave Burgess and a young Glen Campbell. The Trophies Challenge recordings also included an incognito Rick singing bass, unbeknownst to Imperial who he was signed to. The trio of Fuller, Burgess and Campbell were hired on to produce for Rick and replaced The Jordanaires as background singers. This and many more interesting stories are told in this great fan book.

Rick did not want to be remembered as a "teen idol" he wanted to be remembered as a rockabilly artist and there's plenty of first class rockabilly numbers represented in this collection. Such as: Be-Bop Baby (one of his earliest attempts at the genre), the driving If You Can't Rock Me, his cover of Carl Perkins' Boppin' The Blues, the frantic Shirley Lee, Waitin' In School still makes me want to jump up and dance, you can hear Rick's Elvis influence on his version of There's Good Rockin' Tonight, and that's just some of the rockabilly highlights from disc 1 alone.

There's plenty more where that came from in this spectacular box set. Dick Biondi (one of the all-time great disc jockeys) even Shows up doing a radio promo from July 6, 1960 for a Ricky Nelson album. If that isn't enough there are a few handfuls of"on-air" recordings from radio and TV.

Also included is all the recorded material surrounding the coolest 1950's Western movie ever made: "Rio Bravo." Ozzie would alwäys be after teenage Ricky to get his hair cut because he wanted to represent a clean-cut image on "The Adventures of Ozzie and Harriet" so Rick was very pleased to be able to grow his hair and sideburns long for his role as "Colorado."

Also available from Bear Family are the box sets Ricky Nelson For You and the recently released Rick Nelson Last Time Around. All three sets are highly recommended. Special thanks to Kenn Petzke, writer, record collector and original rock & roller since the early 50's, for lending Keep Rockin' his valued Ricky Nelson box set for review. - Lau