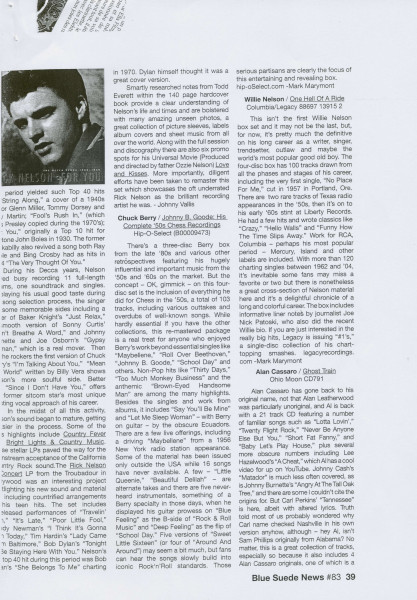 This period yielded such Top 40 hits as "String Along," a cover of a 1940s hit for Glenn Miller, Tommy Dorsey and Tony Martin; "Fool's Rush In," (which Elvis Presley copied during the 1970's); "For You," originally a Top 10 hit for Baritone John Boles in 1930. The former Rockabilly also revived a song both Ray Noble and Bing Crosby had as hits in 1934 "The Very Thought Of You." During his Decca years, Nelson stayed busy recording 11 full-length albums, one soundtrack and singles. Displaying his usual good taste during the song selection process, the singer cut some memorable sides including a cover of Baker Knight's "Just Relax," a smooth version of Sonny Curtis' "Don't Breathe A Word," and Johnny Burnette and Joe Osborn's "Gypsy Woman," which is a real mover. Then for the rockers the first version of Chuck Berry's "I'm Talking About You," "Mean Old World" written by Billy Vera shows Nelson's more soulful side. Better still, "Since I Don't Have You," offers the former sitcom star's most unique blasting vocal approach of his career.

In the midst of all this activity, Nelson's sound began to mature, getting rootsier in the process. Some of the set's highlights include Country Fever and Bright Lights & Country Music. These stellar LPs paved the way for the mainstream acceptance of the California Country Rock sound.The Rick Nelson In Concert LP from the Troubadour in Hollywood was an interesting project spotlighting his new sound and material and including countrified arrangements of his teen hits. The set includes unreleased performances of "Travelin' Man," "It's Late," "Poor Little Fool," Randy Newman's "I Think It's Gonna Rain Today," Tim Hardin's "Lady Came From Baltimore," Bob Dylan's "Tonight I'll Be Staying Here With You."

Nelson's last top 40 hit during this period was Bob Dylan's "She Belongs To Me" charting in 1970. Dylan himself thought it was a great cover version. Smartly researched notes from Todd Everett within the 140 page hardcover book provide a clear understanding of Nelson's life and times and are bolstered with many amazing unseen photos, a great collection of picture sleeves, labels album covers and sheet music from all over the world. Along with the full session and discography there are also six promo spots for his Universal Movie (Produced and directed by father Ozzie Nelson) Love and Kisses. More importantly, diligent efforts have been taken to remaster this set which showcases the oft underrated Rick Nelson as the brilliant recording artist he was. -- Johnny Vallis