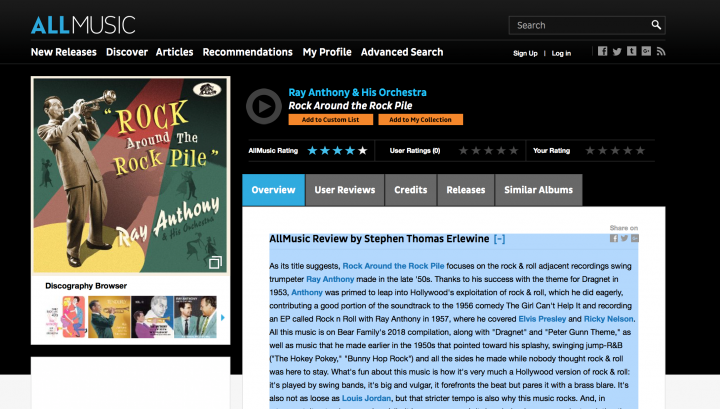 AllMusic Review by Stephen Thomas Erlewine [-]
As its title suggests, Rock Around the Rock Pile focuses on the rock & roll adjacent recordings swing trumpeter Ray Anthony made in the late '50s. Thanks to his success with the theme for Dragnet in 1953, Anthony was primed to leap into Hollywood's exploitation of rock & roll, which he did eagerly, contributing a good portion of the soundtrack to the 1956 comedy The Girl Can't Help It and recording an EP called Rock n Roll with Ray Anthony in 1957, where he covered Elvis Presley and Ricky Nelson. All this music is on Bear Family's 2018 compilation, along with "Dragnet" and "Peter Gunn Theme," as well as music that he made earlier in the 1950s that pointed toward his splashy, swinging jump-R&B ("The Hokey Pokey," "Bunny Hop Rock") and all the sides he made while nobody thought rock & roll was here to stay. What's fun about this music is how it's very much a Hollywood version of rock & roll: it's played by swing bands, it's big and vulgar, it forefronts the beat but pares it with a brass blare. It's also not as loose as Louis Jordan, but that stricter tempo is also why this music rocks. And, in retrospect, it not only seems hep (albeit in a corny sense), it does indeed seem prescient, pointing the way to the jumping jive of the 1990s swing revival, specifically Brian Setzer.