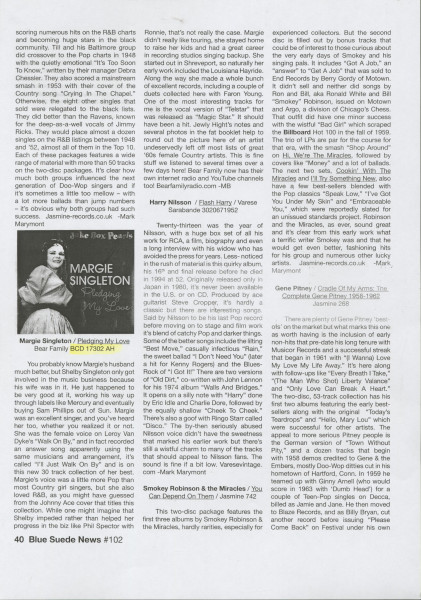 Margie Singleton / Pledging My Love Bear Family BCD 17302 AH
You probably know Margie's husband much better, but Shelby Singleton only got involved in the music business because his wife was in it. He just happened to be very good at it, working his way up through labels like Mercury and eventually buying Sam Phillips out of Sun. Margie was an excellent singer, and you've heard her too, whether you realized it or not. She was the female voice on Leroy Van Dyke's 'Walk On By,' and in fact recorded an answer song apparently using the same musicians and arrangement, it's called 'I'll Just Walk On By' and is on this new 30 track collection of her best.

Margie's voice was a little more Pop than most Country girl singers, but she also loved R&B, as you might have guessed from the Johnny Ace cover that titles this collection. While one might imagine that Shelby impeded rather than helped her progress in the biz like Phil Spector with Ronnie, that's not really the case. Margie didn't really like touring, she stayed home to raise her kids and had a great career in recording studios singing backup. She started out in Shreveport, so naturally her early work included the Louisiana Hayride. Along the way she made a whole bunch of excellent records, including a couple of duets collected here with Faron Young. One of the most interesting tracks for me is the vocal version of 'Telstar' that was released as 'Magic Star.' It should have been a hit. Jewly Hight's notes and several photos in the fat booklet help to round out the picture here of an artist undeservedly left off most lists of great `60s female Country artists.