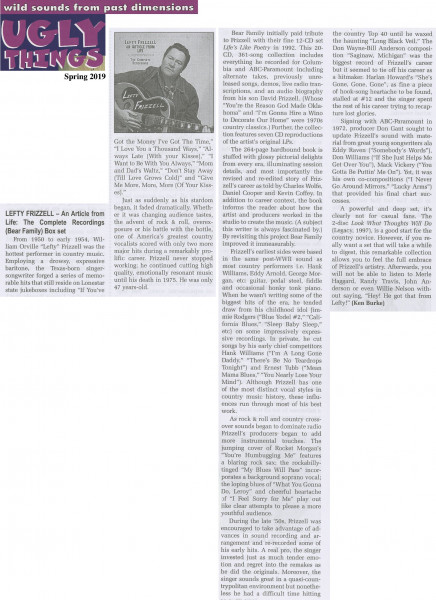 wild sounds from past dimensions

Spring 2019
LEFTY FRIZZELL — An Article from Life: The Complete Recordings (Bear Family) Box set From 1950 to early 1954, Wil-liam Orville "Lefty" Frizzell was the hottest performer in country music. Employing a drowsy, expressive baritone, the Texas-born singer-songwriter forged a series of memo-rable hits that still reside on Lonestar state jukeboxes including "If You've
Got the Money I've Got The Time," "I Love You a Thousand Ways," "Al-ways Late (With your Kisses)," "I Want to Be With You Always," "Mom and Dad's Waltz," "Don't Stay Away (Till Love Grows Cold)" and "Give Me More, More, More (Of Your Kiss-es)." Just as suddenly as his stardom began, it faded dramatically.

Wheth-er it was changing audience tastes, the advent of rock & roll, overex-posure or his battle with the bottle, one of America's greatest country vocalists scored with only two more major hits during a remarkably pro-lific career. Frizzell never stopped working; he continued cutting high quality, emotionally resonant music until his death in 1975. He was only 47 years-old.
Bear Family initially paid tribute to Frizzell with their fine 12-CD set Life's Like Poetry in 1992. This 20-CD, 361-song collection includes everything he recorded for Colum-bia and ABC-Paramount including alternate takes, previously unre-leased songs, demos, live radio tran-scriptions, and an audio biography from his son David Frizzell. (Whose "You're the Reason God Made Okla-homa" and "I'm Gonna Hire a Wino to Decorate Our Home" were 1970s country classics.)

Further, the collec-tion features seven CD reproductions of the artist's original LPs. The 264-page hardbound book is stuffed with glossy pictorial delights from every era, illuminating session details, and most importantly the revised and re-edited story of Friz-zell's career as told by Charles Wolfe, Daniel Cooper and Kevin Coffey. In addition to career context, the book informs the reader about how the artist and producers worked in the studio to create the music. (A subject this writer is always fascinated by.) By revisiting this project Bear Family improved it immeasurably. Frizzell's earliest sides were based in the same post-WWII sound as most country performers i.e. Hank Williams, Eddy Arnold, George Mor-gan, etc: guitar, pedal steel, fiddle and occasional honky tonk piano. When he wasn't writing some of the biggest hits of the era, he tended draw from his childhood idol Jim-mie Rodgers ("Blue Yodel #2," "Cali-fornia Blues," "Sleep Baby Sleep," etc) on some impressively expres-sive recordings. In private, he cut songs by his early chief competitors Hank Williams ("I'm A Long Gone Daddy," "There's Be No Teardrops Tonight") and Ernest Tubb ("Mean Mama Blues," "You Nearly Lose Your Mind").

Although Frizzell has one of the most distinct vocal styles in country music history, these influ-ences run through most of his best work. As rock & roll and country cross-over sounds began to dominate radio Frizzell's producers began to add more instrumental touches. The jumping cover of Rocket Morgan's "You're Humbugging Me" features a blaring rock sax; the rockabilly-tinged "My Blues Will Pass" incor-porates a background soprano vocal; the loping blues of "What You Gonna Do, Leroy" and cheerful heartache pf "I Feel Sorry for Me" play out like clear attempts to please a more youthful audience. During the late '50s, Frizzell was encouraged to take advantage of ad-vances in sound recording and ar-rangement and re-recorded some of his early hits. A real pro, the singer invested just as much tender emo-tion and regret into the remakes as he did the originals. Moreover, the singer sounds great in a quasi-coun-trypolitan environment but nonethe-less he had a difficult time hitting the country Top 40 until he waxed the haunting "Long Black Veil." The Don Wayne-Bill Anderson composi-tion "Saginaw, Michigan" was the biggest record of Frizzell's career but it seemed to tie off his career as a hitmaker.

Harlan Howard's "She's Gone, Gone, Gone", as fine a piece of hook-song heartache to be found, stalled at #12 and the singer spent the rest of his career trying to recap-ture lost glories. Signing with ABC-Paramount in 1972, producer Don Gant sought to update Frizzell's sound with mate-rial from great young songwriters ala Eddy Raven ("Somebody's Words"), Don Williams ("If She Just Helps Me Get Over You"), Mack Vickery ("You Gotta Be Puttin' Me On"). Yet, it was his own co-compositions ("I Never Go Around Mirrors," "Lucky Arms") that provided his final chart suc-cesses. A powerful and deep set, it's clearly not for casual fans. The 2-disc Look What Thoughts Will Do (Legacy, 1997), is a good start for the country novice. However, if you re-ally want a set that will take a while to digest, this remarkable collection allows you to feel the full embrace of Frizzell's artistry. Afterwards, you will not be able to listen to Merle Haggard, Randy Travis, John An-derson or even Willie Nelson with-out saying, "Hey! He got that from Lefty!" (Ken Burke)