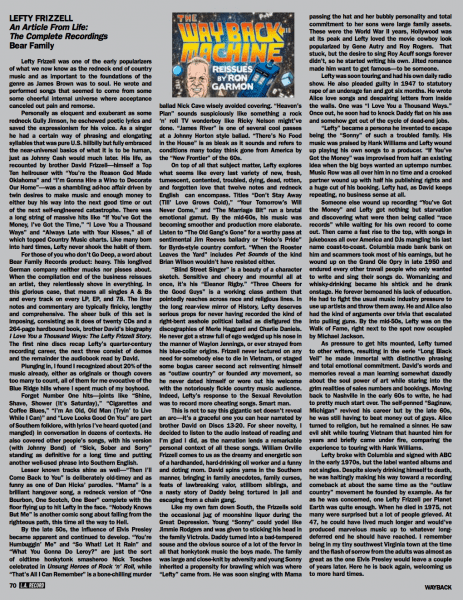 LEFTY FRIZZELL An Article From Ulm The Complete Recordings Bear Family
Lefty Frail was one of the early popularizers of what we now know as the redneck end &country music and as important to the foundations of the genre as lames Brown was to soul. He wrote mg Performed songs that seemed to come from some some cheerful Internal unNerse where acceptance canceled out pain and remorse. Personally as eloquent and exuberant as some redneck Gully lImson, he exhewed poet, lyrics and saved the expressionism for his voice. As a sirger he had a certain way of phrasing and elongating syllablesthatwas pure H.S. hillbilly butfullyernbraced the nearoniversal basics of what it is to be life, as Johnny Cash would much later. His life, as recounted by brother David Fritteell—himsell a Top Ten helhauser with "You're the Reason God Ma. 010ahoma" and Gonna Hire a Wino to Decorate • Home"—wa a sharnbling ac.oc affair driven by twin desires to make music next money to efther buy his way into the next good time or out of the nett selkmgineered catastrophe. There was a bog string of massive htts like "If You've Got the Money, I've Got the Tirne," "I Love You a Thousand Ways" and "Agays Late with Your 100es," all of .1. topped Cou.ry Music charts. Like oftny born into hard times, Lefty neveI shook the habit hem. Forgose of you who don'tGo Dee This Bern Family Records product: heavy.p,

This bugged German cornpany neiger mucks nor pisses about. When the compilation end of the business reissues an art., they relentlessly shove in everything. in this glorious case, that means all sittgles A & B5 a. every track on every LP, EP, and 78. The liner notes ana comme.ary are typically ...Y. buggrY a. comprehensive. The sheer bulk of this set is imposing, con... as it does of hire. CDs and a 264-page hardbound book, Mother Davi• biography Love You a Thousand Ways: The WO Fd.MR story. The first nine discs reca lefty's quarter... recording car. the next three three consist of demos and the remaInder the ...oh mad by David. Plunging in, If.. 1, aboutRObotthe music already, either as originals or thong)) covers too many. count, 811of thorn br rne evocative of the Blue Ridge hills where I.e. much al my boyhood. Forget Number One hits—Joints like ne, Shave, Shower Ors SatuMatt," "Cigarettes 00 Coffee Blues," Im An Old, OM Man (Tryin' to Live While ea)" and "Loe Looks Good On ',Sou" are part of Southern folklore, with lyrics Me heard Quoted land mangled) in conversation III dozens of co.. He also covered oger of son., with his version (wig Johnny Bona) of "Sick. Sober and ,Qtly" standing as definitive rata long time and putting another wages. phrase into Southern English. L0ser brown tracks shine as well--"Then I'll Come Back to You" is deliberately oldtirney and as funny as one of Dan Hicks' parodies. "Marne is a brilliant hangover song, a redneck version of "One Bourbon, One cotch, One Beer complete with the flOOIllying..1. Lefty In the face. "Nobody Knows ut Me" b another cic song aboutklling onttheBgt.us path, his tme all the way to Hell. By Om late 50s, the influence of Etts Presley becarne apparent and continued to develop. "You're Hurnbuggin' Me" and "So What! Let It Rain" and "What You Gonna Do Leroyr are just the sort of oldtirne hankttonk smasher. Nick Tosches celebrated in Unsung Memos of Rook 'a' Polt while "That's Ail I Can Remember" 68 bonttchilling murder