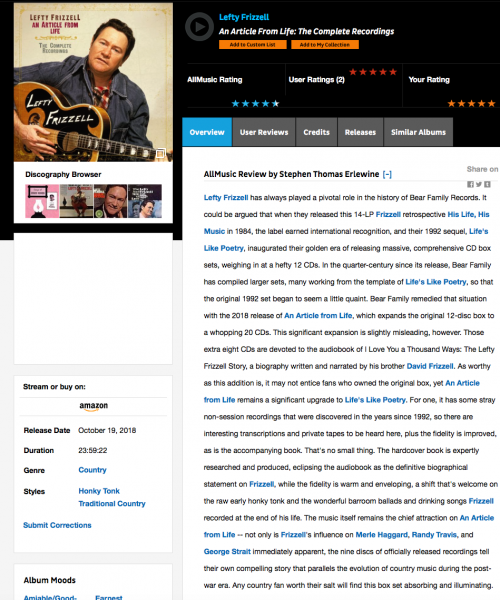 AllMusic Review by Stephen Thomas Erlewine [-]
Lefty Frizzell has always played a pivotal role in the history of Bear Family Records. It could be argued that when they released this 14-LP Frizzell retrospective His Life, His Music in 1984, the label earned international recognition, and their 1992 sequel, Life's Like Poetry, inaugurated their golden era of releasing massive, comprehensive CD box sets, weighing in at a hefty 12 CDs. In the quarter-century since its release, Bear Family has compiled larger sets, many working from the template of Life's Like Poetry, so that the original 1992 set began to seem a little quaint. Bear Family remedied that situation with the 2018 release of An Article from Life, which expands the original 12-disc box to a whopping 20 CDs. This significant expansion is slightly misleading, however. Those extra eight CDs are devoted to the audiobook of I Love You a Thousand Ways: The Lefty Frizzell Story, a biography written and narrated by his brother David Frizzell.

As worthy as this addition is, it may not entice fans who owned the original box, yet An Article from Life remains a significant upgrade to Life's Like Poetry. For one, it has some stray non-session recordings that were discovered in the years since 1992, so there are interesting transcriptions and private tapes to be heard here, plus the fidelity is improved, as is the accompanying book. That's no small thing. The hardcover book is expertly researched and produced, eclipsing the audiobook as the definitive biographical statement on Frizzell, while the fidelity is warm and enveloping, a shift that's welcome on the raw early honky tonk and the wonderful barroom ballads and drinking songs Frizzell recorded at the end of his life. The music itself remains the chief attraction on An Article from Life -- not only is Frizzell's influence on Merle Haggard, Randy Travis, and George Strait immediately apparent, the nine discs of officially released recordings tell their own compelling story that parallels the evolution of country music during the post-war era. Any country fan worth their salt will find this box set absorbing and illuminating.