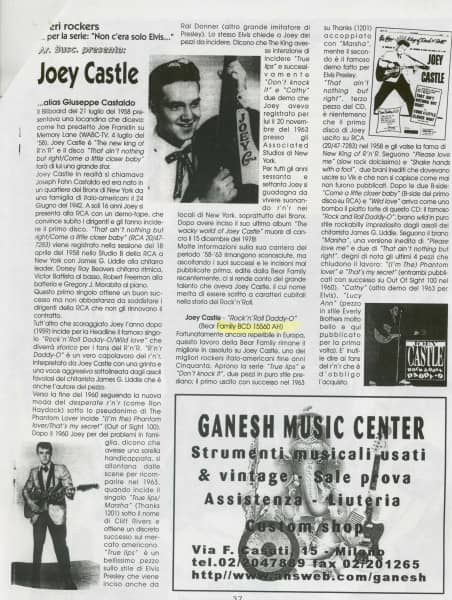 Joey Castle
...alias Giuseppe Castaldo The Billboard of July 21, 1958 presented a poster that said: as Joe Franklin predicted on Memory Lane (WABC-TV, July 4, 1958), Joey Castle is "The new king of R'n'R" and the disc "That ain't nothing but right / Come a little closer baby" will make him a big star. Joey Castle was actually called Joseph Fohn Castaldo and was born in a Bronx neighborhood of New York to a family of Italian Americans on June 24, 1942. At the age of just 16, Joey introduces herself to the RCA with a demo-tape, which immediately convinces the executives and makes him record the first album.

"That ain't nothing but right/Come a líttle closer baby" (RCA 20/47-7283) was recorded in the April 18, 1958 session of RCA Studio B in New York with James G. Liddle on the leading guitar, Dorsey Ray Beavers on rhythm guitar, Victor Battista on bass, Robert Freeman on drums and Gregory J. Morabito on piano. This first single was a good success, but not enough to satisfy RCA executives who did not renew their contract. Far from discouraged Joey the following year (1959) he recorded for Headline the famous singles "Rock'n'Roll Daddy-O/Wild love" that would become historical for R'n'R fans. "R'n'r Daddy-O" is a true masterpiece of r'n'r, played by Joey Castle with a determination and an aggressive voice emphasized by the fabulous solos of guitarist James G. Liddle who is also the author of the piece.

Towards the end of 1960, following the new fashion of the desperate r'n'r (like Ron Haydock), theor the pseudonym of The Phantom Lover inscription '(i'm the) Phantom lover/That's my secret' (Out of Sight 100). After 1960 Joey for family problems, they say that she had a handicapped sister, moved away from the scenes to reappear in 1963, when she recorded the single "True lips / Marsha" (Thanks 1201) under the name of Cliff Rivers and gets a fair success on the American market. "True lips" is a beautiful piece in the style of Elvis Presley that is also recorded by RaI Donner (another great imitator of Presley). Elvis himself asked Joey for pieces to engrave. They say that The King had intended to record "True lips" and successively "Don't knock it" and "Cathy" two demos that Joey had recorded for him on the 20th novem-break of 1963 at the Associated Studios in New York.

Throughout the sixties and seventies Joey earned her living suonan-do r'n'r in the clubs of New York, especially the Bronx. After recording his latest album "The wacky world of Joey Castle" he dies of can-cro on December 15, 1978! Much information about his career of the '58-'63 period remains unknown, but listening to his successes and recordings never published before, published by the Bear Family recently, you realize the great talent that had Joey Castle, whose name deserves to be written in cubital characters in the history of Rock'n'Roll.


Joey Castle - "Rock'n'Roll Daddy-O" (Bear Family BCD 15560 AH) Fortunately still available in Europe, this work by the Bear Family remains the best ever on Joey Castle, one of the best Italian-American rockers of the late fifties. They opened the series "True lips" and "Don't knock it", two pieces in pure pre-Salian style; the first was successfully released in 1963 on Thanks (1201) coupled with "Marsha", while the second is the famous demo made for Elvis Presley.

"That ain't nothing but right", the third piece of the CD, is none other than Joey's first record released on RCA (20/47-7283) in 1958 and earned him the fame of New King of R'n'R. Followed by "Please love me (slow rock sweet) and "Shake hands with a fool", two new songs that were to be released on Vik and that you can not understand why they were not published. After the two B-sides: "Come a little closer baby" (B-side of the first record on RCA) and "Wild love" comes like a bomb the main dish of this CD: the famous "Rock and Roll Daddy-O", wild song in pure rockabilly style embellished by the solos of guitarist James G. LIddle.

Followed by the song "Marsha", an unpublished version of "Please love me" and two of "That ain't nothing but right". Noteworthy are the last 4 pieces that close the work: "(I'm The) Phantom lover" and "That's my secret" (both published with success on Out Of Sight 100 in 1960), "Cathy" (another 1963 demo for Elvis), "Lucy Ann" (Everly Brothers style very nice piece and published here for the first time). It's useless to tell r'n'r fans that the purchase is a must.