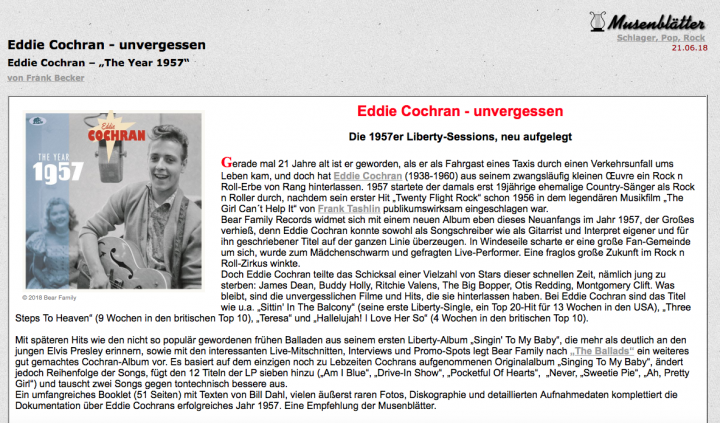 He was only 21 years old when he died in a traffic accident as a taxi passenger, and yet Eddie Cochran (1938-1960) has left behind a Rock n Roll heritage of distinction from his inevitably small oeuvre. In 1957, the then 19-year-old former country singer took off as Rock n Roller after his first hit "Twenty Flight Rock" had already been featured in Frank Tashlin's legendary music film "The Girl „Twenty Help It" in 1956.

Bear Family Records dedicated a new album to this new beginning in 1957, which promised great things, because Eddie Cochran could convince as a songwriter as well as a guitarist and interpreter of his own and for him written songs all along the line. In no time at all he gathered a large fan community around him, became a swarm of girls and a sought-after live performer. There was no doubt that there was a great future in the Rock n Roll circus.

But Eddie Cochran shared the fate of a multitude of stars of this fast time, namely to die young: James Dean, Buddy Holly, Ritchie Valens, The Big Bopper, Otis Redding, Montgomery Clift. What remains are the unforgettable films and hits they have left behind. Eddie Cochran's titles include "Sittin' In The Balcony" (his first Liberty single, a top 20 hit for 13 weeks in the USA), "Three Steps To Heaven" (9 weeks in the British top 10), "Teresa" and "Hallelujah! I Love Her So" (4 weeks in the British Top 10).

With later hits like the not so popular early ballads from his first Liberty album "Singin' To My Baby", which more than clearly remind of the young Elvis Presley, as well as interesting live recordings, interviews and promo spots, Bear Family presents another well-made Cochran album after "The Ballads". It is based on the only original album "Singing To My Baby" recorded during Cochran's lifetime, but changes the order of the songs, adds seven to the 12 titles of the LP ("Am I Blue", "Drive-In Show", "Pocketful Of Hearts", "Never, "Sweetie Pie", "Ah, Pretty Girl") and exchanges two songs for better sound quality.