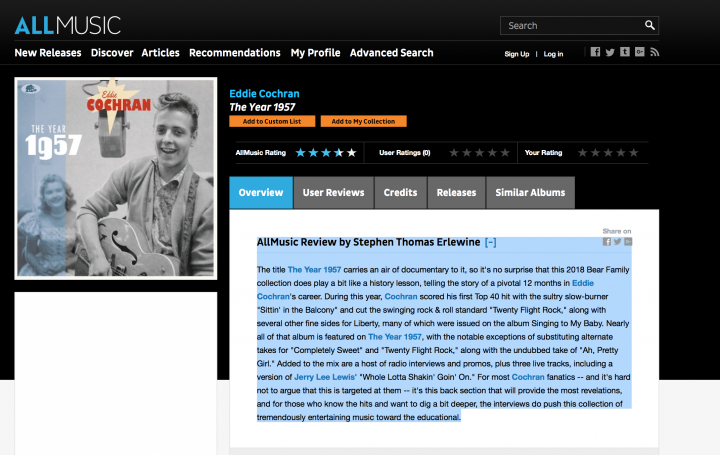 AllMusic Review by Stephen Thomas Erlewine [-]
The title The Year 1957 carries an air of documentary to it, so it's no surprise that this 2018 Bear Family collection does play a bit like a history lesson, telling the story of a pivotal 12 months in Eddie Cochran's career. During this year, Cochran scored his first Top 40 hit with the sultry slow-burner "Sittin' in the Balcony" and cut the swinging rock & roll standard "Twenty Flight Rock," along with several other fine sides for Liberty, many of which were issued on the album Singing to My Baby. Nearly all of that album is featured on The Year 1957, with the notable exceptions of substituting alternate takes for "Completely Sweet" and "Twenty Flight Rock," along with the undubbed take of "Ah, Pretty Girl." Added to the mix are a host of radio interviews and promos, plus three live tracks, including a version of Jerry Lee Lewis' "Whole Lotta Shakin' Goin' On." For most Cochran fanatics -- and it's hard not to argue that this is targeted at them -- it's this back section that will provide the most revelations, and for those who know the hits and want to dig a bit deeper, the interviews do push this collection of tremendously entertaining music toward the educational.