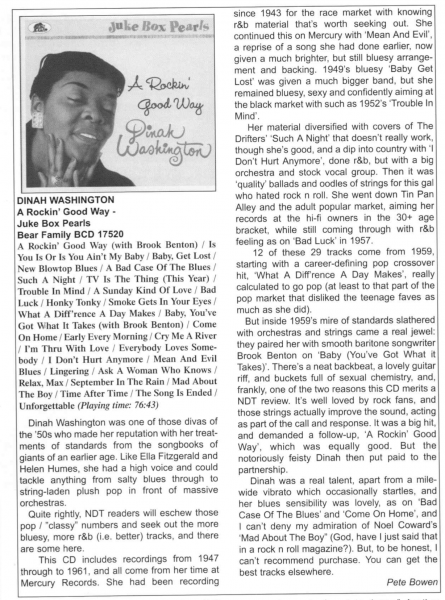 Dinah Washington was one of those divas of the '50s who made her reputation with her treat-ments of standards from the songbooks of giants of an earlier age. Like Ella Fitzgerald and Helen Humes, she had a high voice and could tackle anything from salty blues through to string-laden plush pop in front of massive orchestras. Quite rightly. NDT readers will eschew those pop / "classy" numbers and seek out the more bluesy, more r&b (i.e. better) tracks, and there are some here. This CD includes recordings from 1947 through to 1961. and all come from her time at Mercury Records.

She had been recording since 1943 for the race market with knowing r&b material that's worth seeking out. She continued this on Mercury with 'Mean And Evil'. a reprise of a song she had done earlier. now given a much brighter, but still bluesy arrange-ment and backing. 1949's bluesy 'Baby Get Lost' was given a much bigger band, but she remained bluesy, sexy and confidently aiming at the black market with such as 1952's 'Trouble In Mind'. Her material diversified with covers of The Drifters' Such A Night' that doesn't really work, though she's good. and a dip into country with 'I Don't Hurt Anymore'. done r&b, but with a big orchestra and stock vocal group. Then it was 'quality' ballads and oodles of strings for this gal who hated rock n roll. She went down Tin Pan Alley and the adult popular market, aiming her records at the hi-fi owners in the 30+ age bracket, while still coming through with r&b feeling as on 'Bad Luck' in 1957. 12 of these 29 tracks come from 1959, starting with a career-defining pop crossover hit, 'What A Diff'rence A Day Makes', really calculated to go pop (at least to that part of the pop market that disliked the teenage faves as much as she did).

But inside 1959's mire of standards slathered with orchestras and strings came a real jewel: they paired her with smooth baritone songwriter Brook Benton on 'Baby (You've Got What it Takes)'. There's a neat backbeat, a lovely guitar riff, and buckets full of sexual chemistry, and, frankly, one of the two reasons this CD merits a NDT review. It's well loved by rock fans, and those strings actually improve the sound, acting as part of the call and response. It was a big hit, and demanded a follow-up, 'A Rockin' Good Way', which was equally good. But the notoriously feisty Dinah then put paid to the partnership. Dinah was a real talent, apart from a mile-wide vibrato which occasionally startles, and her blues sensibility was lovely, as on 'Bad Case Of The Blues' and 'Come On Home', and I can't deny my admiration of Noel Coward's 'Mad About The Boy" (God, have I just said that in a rock n roll magazine?). But, to be honest, I can't recommend purchase. You can get the best tracks elsewhere.
Pete Bowen