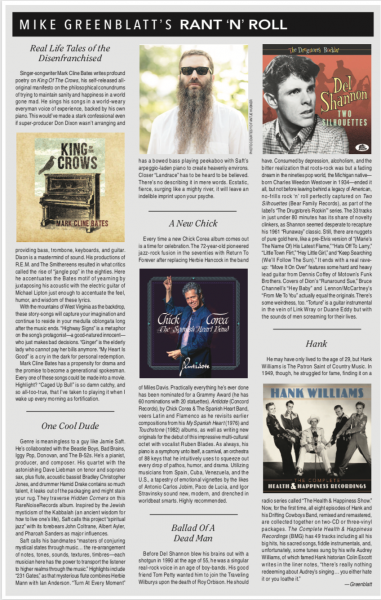 Ballad Of A Dead Man
Before Del Shannon blew his brains out with a shotgun in 1990 at the age of 55, he was a singular real-rock voice in an age of boy-bands. His good friend Tom Petty wanted him to join the Traveling Wilburys upon the death of Roy Orbison. He should have. Consumed by depression, alcoholism, and the bitter realization that roots-rock was but a fading dream in the nineties pop world, the Michigan native—born Charles Weedon Westover in 1934—ended it all, but not before leaving behind a legacy of American, no-frills rock 'n' roll perfectly captured on Two Silhouettes (Bear Family Records), as part of the label's "The Drugstore's Rockin- series.

The 33 tracks in just under 80 minutes has its share of novelty clinkers, as Shannon seemed desperate to recapture his 1961 "Runaway' classic. Still, there are nuggets of pure gold here, like a pre-Elvis version of "(Marie's The Name Of) His Latest Flame, "Hats Off To Larry," -Little Town Flirt, Hey Little Girl, and "Keep Searching (We'll Follow The Sun)."

It ends with a real rave-up: "Move It On Over" features some hard and heavy lead guitar from Dennis Coffey of Motown's Funk Brothers. Covers of Dion's "Runaround Sue," Bruce Channell's "Hey Baby' and Lennon/McCartney's From Me To You" actually equal the originals. There's some weirdness, too. -Torture" is a guitar instrumental in the vein of Link Wray or Duane Eddy but with the sounds of men screaming for their lives.