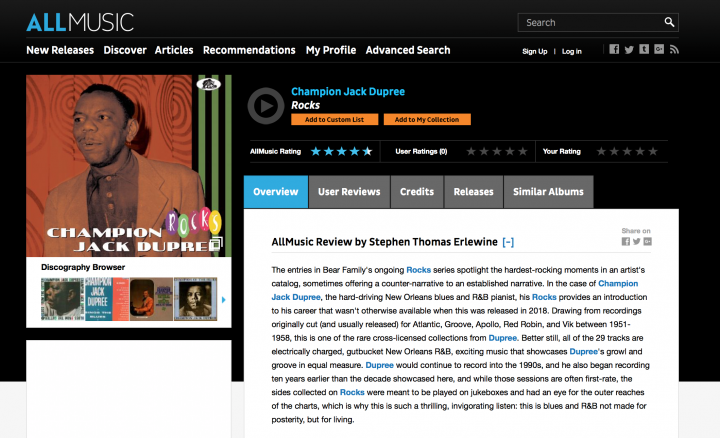 AllMusic Review by Stephen Thomas Erlewine [-]
The entries in Bear Family's ongoing Rocks series spotlight the hardest-rocking moments in an artist's catalog, sometimes offering a counter-narrative to an established narrative. In the case of Champion Jack Dupree, the hard-driving New Orleans blues and R&B pianist, his Rocks provides an introduction to his career that wasn't otherwise available when this was released in 2018. Drawing from recordings originally cut (and usually released) for Atlantic, Groove, Apollo, Red Robin, and Vik between 1951-1958, this is one of the rare cross-licensed collections from Dupree. Better still, all of the 29 tracks are electrically charged, gutbucket New Orleans R&B, exciting music that showcases Dupree's growl and groove in equal measure. Dupree would continue to record into the 1990s, and he also began recording ten years earlier than the decade showcased here, and while those sessions are often first-rate, the sides collected on Rocks were meant to be played on jukeboxes and had an eye for the outer reaches of the charts, which is why this is such a thrilling, invigorating listen: this is blues and R&B not made for posterity, but for living.