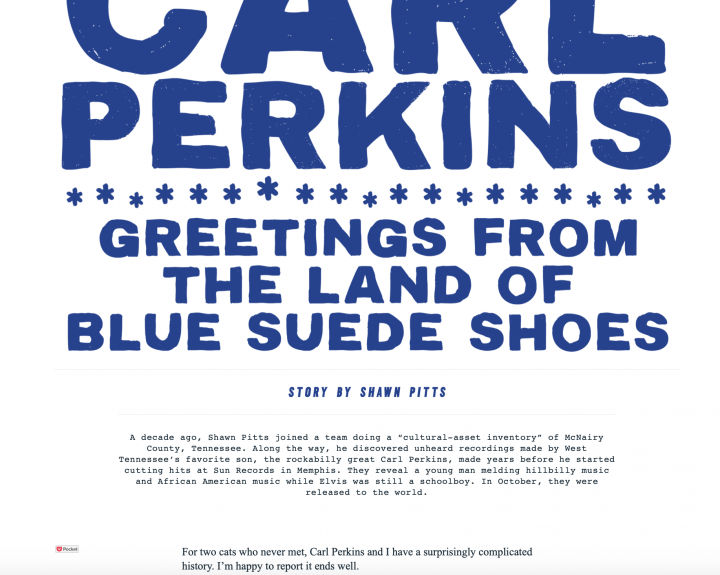 A decade ago, Shawn Pitts joined a team doing a “cultural-asset inventory” of McNairy County, Tennessee. Along the way, he discovered unheard recordings made by West Tennessee’s favorite son, the rockabilly great Carl Perkins, made years before he started cutting hits at Sun Records in Memphis. They reveal a young man melding hillbilly music and African American music while Elvis was still a schoolboy. In October, they were released to the world.
For two cats who never met, Carl Perkins and I have a surprisingly complicated history. I’m happy to report it ends well.
When I was growing up in west Tennessee, Carl Perkins, who wrote the rock-and-roll standard “Blue Suede Shoes” in 1955, was everywhere. The civic center in Carl’s Jackson, Tennessee, hometown bore his name. He was a fixture at benefit concerts and other events in our region. Carl was always the main attraction on the annual Circles of Hope Telethon, which raised (and still raises) much-needed funds for children’s charities. Because of the groundwork he laid, a vast network of child-abuse prevention centers across west Tennessee bear his name. People who knew him say all the things Carl Perkins accomplished in his remarkable life, he was proudest of his work on behalf of the region’s most vulnerable children. I would wager that’s more than just a warm, fuzzy story. Personal friends attest to his genuine benevolence and passion for serving kids in need.

Our deep familiarity with the aging, philanthropic Perkins of the 1980s ensured most west Tennessee kids of my generation would disregard him as an artist. I remember seeing him on the telethons and other TV appearances and thinking he was an admirable man. But not exactly a cool one. By the late 1970s and early ’80s, he wore a bad rug to hide a receding hairline. A gaudy pair of gold-rimmed, Vegas/Elvis glasses did not help his look.

To make matters worse, my father liked Carl’s music. That was the kiss of death, as far as coolness was concerned. A strictly enforced code of social conduct forbade Gen X-ers from finding anything about their parents remotely appealing.
By the time I was in middle school, the disco craze was in full swing, and I could not have been more disgruntled with the state of popular music. One of my friends — a garage-band hero and frequent band mate of mine — got busted for wearing a “Disco Sucks!” T-shirt to school. Desperate times call for desperate measures. What was a budding young musician and devoted music snob, who longed for musical authenticity, to do?

I turned off the radio and went searching through the annals of rock-and-roll history for inspiration.
To my great astonishment, nearly everywhere I looked, I found traces of Carl Perkins from right here in the South.
Carl Perkins performing in Atlanta, Georgia, on October 11, 1986. He was 64 years old at the time. [Photo by Rick Diamond/Getty Images]
Paul McCartney and George Harrison idolized the man, and the Beatles covered at least a half dozen of his songs. Harrison later went out of his way to attend Carl’s 1998 funeral in Jackson. McCartney observed, “If there were no Carl Perkins, there would be no Beatles.” Bob Dylan, Eric Clapton, and Jimi Hendrix, among dozens of other legendary figures, cited Carl as an influence. Toupee aside, I began to think I might have misjudged the man. It’s one thing to shrug off your father’s taste in music, but quite another to turn a deaf ear to the rock-and-roll pantheon.
I could almost hear my dad saying, “Who’s the cool one now, sonny boy?”
In young adulthood I acknowledged the error of my ways and repented in sackcloth and blue suedes. A begrudging respect for Carl Perkins had grown into something more like pride and affection: pride a country boy from my neck of the woods had changed the course of popular music by just being who he was; sincere affection for his music, and by extension, the man who created it. If you seek an authentic Southern musical voice, you can’t do much better than Carl Perkins.
Something as complex and emotionally freighted as a dispute about cultural ownership is never fully resolved. Elvis Presley devotees would never willingly see the “king of rock-and-roll” deposed from his throne. And yet, those who advocate for origin stories weighted more heavily toward African American artists like Fats Domino or Chuck Berry have strong claims. Interrogating stale and simplistic narratives is vital to improved understanding, and nuanced questions are almost always more valuable than final answers. If we can agree rock-and-roll grows organically from a Southern seedbed fertile with both traditions, Stanton Littlejohn and Carl Perkins complicate matters in some significant ways. That can only be a good thing.

A typical weekend jam session at the Latta Ford Motor Company in Selmer, Tennessee circa 1949. Stanton Littlejohn is the fiddler on stage to the far left. Carl Perkins is the young guitarist seen standing on the far right [photo courtesy of the Latta family].
I am not the first to observe that Carl never received his due credit as a musical innovator and guitarist, despite the praise of various musical luminaries. But Carl’s rockabilly anthem, “Blue Suede Shoes,” was the first single to top the country, pop and R&B charts simultaneously. It was the “Old Town Road” of its day, engendering just as much — if not more — controversy for blurring arbitrary racial lines created for ruthless commercial purposes by the music industry establishment. Sound familiar?
“Blue Suede Shoes” was foremost a great tune, rightly recognized as one of the most influential recordings of the 20th century by everyone from the music press to the Grammy organizers to the Library of Congress. It was also a cultural game-changer that challenged long-standing institutional norms in the music business and sent shock waves through larger society. Eminent Memphis music historian and journalist Stanley Booth went as far as suggesting that African-American embrace of “Blue Suede Shoes” represented a grass-roots acknowledgment of a shared heritage between poor black and white Southerners, a gesture of forgiveness and redemption.
Groundbreaking as it was, “Blue Suede Shoes” has little to do with my personal esteem for Carl Perkins. The raw energy in his Sun Records singles like “Matchbox,” “Honey Don’t,” and “Dixie Fried” won me over. The pain and longing in a honky-tonk weeper like “Turn Around” clearly spelled out Carl’s genius. I loved Carl Perkins for his bona fide Tennessee twang and the boldness to play blues- and R&B-inflected tunes to white honky-tonk audiences — and then dare them not to dance.
When I finally surrendered, my conversion was complete. I’m not ashamed to say I own a pair of blue suede shoes. I would advise you to stay off of them.

So, now, think what it might be like for a west Tennessee boy like me to learn that the first documented recordings of Carl Perkins’ storied career were not cut at Sun, as we have always believed. Imagine someone handed you a couple of dusty acetate discs from the early 1950s with Carl Perkins’ name scrawled across the labels. Imagine those discs were actually what they appeared to be — and that their contents challenged long-accepted narratives about the very origins of rock-and-roll. What if they provided incontrovertible evidence Carl Perkins was making full-throttle rockabilly music while Elvis Presley was still trying to make time with the girls at Humes High School? Wouldn’t that be something?
Well, that’s my story.