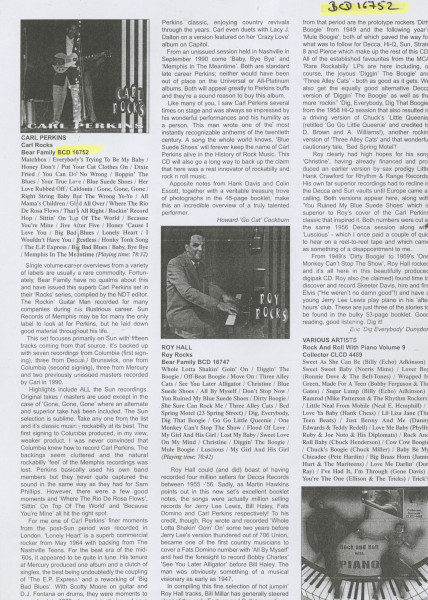 Single volume career overviews from a variety of labels are usually a rare commodity. Fortunately, Bear Family have no qualms about this and have issued this superb Carl Perkins set in their 'Rocks' series, compiled by the NDT editor. The Rockin' Guitar Man recorded for many companies during ms illustrious career. Sun Records of Memphis may be for many the only label to look at for Perkins, but he laid down good material throughout his life.

Highlights include ALL the Sun recordings. Original takes / masters are used except in the case of 'Gone, Gone, Gone' where an alternate and superior take h4. been included. The Sun selection is sublim, take any one from the list and it's classic music, rockabilly at its best. The first signing to Columbia produced, in my view, weaker product. I was never convinced that Columbia knew how to record Carl Perkins. The backings seem cluttered and the natural rockabilly 'feel' of the Memphis recordings was lost. Perkins basically used his own band members but they never quite captured the sound in the same way as they had for Sam Phillips. However, there were a few good moments and 'Where The Rio De Rosa Flows', 'Sittin' On Top Of The World' and 'Because You're Mine' all hit the right spot.

For me one of Carl Perkins' finer moments from the post-Sun period was recorded in London. 'Lonely Heart' is a superb commercial rocker from May 1964 with backing from The Nashville Teens. For the beat era of the mid-'60s, it appeared to be quite in tune. His tenure at Mercury produced one album and a clutch of singles, the best being undoubtedly the coupling of 'The E.P. Express and a reworking of 'Big Bad Blues'. With Scotty Moore on guitar and D.J. Fontana on drums, they were moments to Perkins ciassic, enjoying country revivals through the years. Carl even duets with Lacy J. Dalton on a version featured on her 'Crazy Love' album on Capitol.

From an unissued session held in Nashville in September 1990 come 'Baby, Bye Bye' and 'Memphis In The Meantime'. Both are standard late career Perkins; neither would have been out of place on the Universal or All-Platinum albums. Both will appeal greatly to Perkins buffs and they're a sound reason to buy this album. Like many of you, I saw Carl Perkins several times on stage and was always so impressed by his wonderful performances and his humility as a person. This man wrote one of the' most instantly recognizable anthems of the twentieth century. A song the whole world knows. 'Blue Suede Shoes' will forever keep the name of Carl Perkins alive in the History of Rock Music. This CD will also go a long way to back up the claim that here was a real innovator of rockabilly and rock n roll music. Apposite notes from Hank Davis and Colin Escott, together with a veritable treasure trove of photographs in the 48-page booklet, make this an incredible overview of a truly talented performer.
Howard 'Go Cat' Cockburn