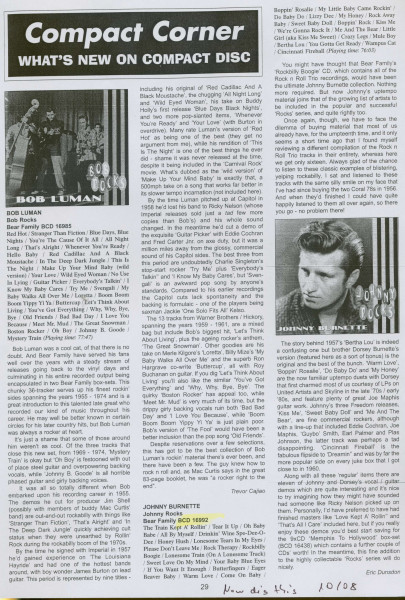 BOB LUMAN Bob Rocks Bear Family BCD 16985 Red Hot / Stranger Than Fiction / Blue Days, Blue Nights / You're The Cause Of It All / All Night Long / That's Alright / Whenever You're Ready / Hello Baby / Red Cadillac And A Black Moustache / In The Deep Dark Jungle / This Is The Night / Make Up Your Mind Baby (wild version) / Your Love / Wild Eyed Woman / No Use In Lying / Guitar Picker / Everybody's Talkin' / I Know My Baby Cares / Try Me / Svengali / My Baby Walks All Over Me / Loretta / Boom Boom Boom Yippy Yi Ya / Buttercup Think About Living / You've Got Everything / Why, Why, Bye, Bye / Old Friends / Bad Bad Day / I Love You Because / Meet Mr. Mud / The Great Snowman / Boston Rocker / Oh Boy / Johnny B. Goode / Mystery Train (Playing time: 77:47)

Bob Luman was a cool cat, of that there is no doubt. And Bear Family have served his fans well over the years with a steady stream of releases going back to the vinyl days and culminating in his entire recorded output being encapsulated in two Bear Family box-sets. This chunky 36-tracker serves up his finest rockin' sides spanning the years 1955 - 1974 and is a great introduction to this talented late great who recorded our kind of music throughout his career. He may well be better known in certain circies for his tater country hits, but Bob Luman was always a rocker at heart. It's just a shame that some of those around him weren't as cool. Of the three tracks that close this new set, from 1969 - 1974, 'Mystery Train' is okay but 'Oh Boy' is festooned with out of place steel guitar and overpowering backing vocals, while 'Johnny B. Goode' is all horrible phased guitar and girly backing voices. lt was all so totally different when Bob embarked upon his recording career in 1955.

The demos he cut for producer Jim Shell (possibly with members of buddy Mac Curtis' band) are out-and-out rockabilly with things like 'Stranger Than Fiction', `That's Alright' and 'In The Deep Dark Jungle' quickly achieving cult status when they were unearthed by Rollin' Rock during the rockabilly boom of the 1970s. By the time he signed with Imperial in 1957 he'd gained experience on 'The Louisiana Hayride' and had one of the hottest bands around. with boy wonder James Burton on lead guitar. This period is represented by nine titles including his original of 'Red Cadillac And A Black Moustache', the chugging 'All Night Long' and 'Wild Eyed Woman', his take on Buddy Holly's first release 'Blue Days Black Nights'. and two more pop-slanted items, 'Whenever You're Ready' and 'Your Love' (with Burton in overdrive). Many rate Luman's version of 'Red Hot' as being one of the best (they get no argument from me), while his rendition of 'This Is The Night' is one of the best things he ever did - shame it was never released at the time, despite it being included in the 'Carnival Rock' movie. What's dubbed as the 'wild version' of `Make Up Your Mind Baby' is exactly that.

a 500mph take on a song that works far better in its slower tempo incarnation (not included here). By the time Luman pitched up at Capitol in 1958 he'd lost his band to Ricky Nelson (whose Imperial releases sold just a tad few more copies than Bob's) and his whole sound changed. In the meantime he'd cut a demo of the exquisite 'Guitar Picker' with Eddie Cochran and Fred Carter Jnr. on axe duty, but it was a million miles away from the glossy, commercial sound of his Capitol sides. The best three from this period are undoubtedly Charlie Singleton's stop-start rocker 'Try Me' plus 'Everybody's Talkin" and 'I Know My Baby Cares', but 'Sven-gali' is an awkward pop song by anyone's standards. Compared to his earlier recordings the Capitol cuts lack spontaneity and the backing is formulaic - one of the players being saxman Jackie 'One Solo Fits All' Kelso. The 13 tracks from Warner Brothers / Hickory, spanning the years 1959 - 1961, are a mixed bag but include Bob's biggest hit, 'Let's Think About Living'. plus the ageing rocker's anthem, 'The Great Snowman'. Other goodies are his take on Merle Kilgore's 'Loretta', Billy Mize's 'My Baby Walks All Over Me' and the superb Ron Hargrave co-write 'Buttercup', all with Roy Buchanan on guitar. If you dig 'Let's Think About Living' you'll also Ilke the similar 'You've Got Everything' and Why. Why, Bye, Bye' The quirky 'Boston Rocker' has appeal too, while `Meet Mr. Mud' is very much of its time, but the drippy girly backing vocals ruin both Bad Bad Day' and 'I Love You Because', while 'Boom Boom Boom Yippy Yi Ya' is just plain poor.

Bob's version of `The Foot would have been a better inclusion than the pop song 'Old Friends'. Despite reservations over a few selections, this has got to be the best collection of Bob Luman's rockin' material there's ever been, and there have been a few. The guy knew how to rock n roll and, as Mac Curtis says in the great 83-page booklet, he was 'a rocker right to the end".
Trevor Cajiao