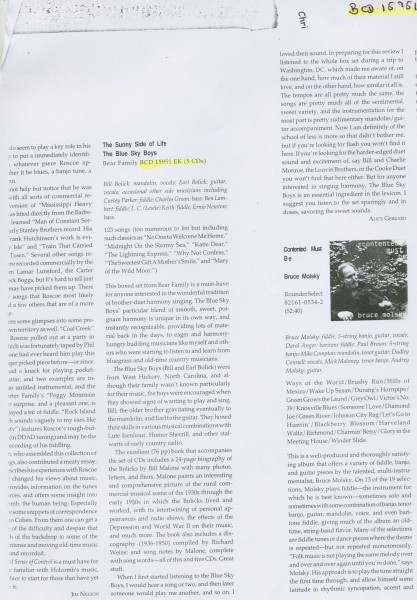 123 songs (too numerous to list but including such classics as "No One to Welcome Me Home," "Midnight On the Stormy Sea," "Katie Dear," "The Lightning Express," "Why Not Confess," "The Sweetest Gift A Mother's Smile," and "Mary of the Wild Moor.")
This boxed set from Bear Family is a must-have for anyone interested in the wonderful tradition of brother-duet harmony singing. The Blue Sky Boys' particular blend of smooth, sweet, poi-gnant harmony is unique in its own way, and instantly recognizable, providing lots of mate-rial back in the days, to eager and harmony-hungry budding musicians like myself and oth-ers who were starting to listen to and learn from bluegrass and old-time country musicians.

The Blue Sky Boys (Bill and Earl Bolick) were from West Hickory, North Carolina, and al-though their family wasn't known particularly for their music, the boys were encouraged when they showed signs of wanting to play and sing, Bill, the older brother gravitating eventually to the mandolin, and Earl to the guitar. They honed their skills in various musical combinations with Lute Isenhour, Homer Sherrill, and other stal-warts of early country radio. The excellent (76 pp) book that accompanies the set of CDs includes a 24-page biography of the Bolicks by Bill Malone with many photos, letters, and fliers. Malone paints an interesting and comprehensive picture of the rural com-mercial musical scene of the 1930s through the early 1950s in which the Bolicks lived and worked, with its intertwining of personal ap-pearances and radio shows, the effects of the Depression and World War II on their music, and much more. The book also includes a dis-cography (1936-1950) compiled by Richard Weize; and song notes by Malone, complete with song words—all of this and five CDs. Great stuff. When I first started listening to the Blue Sky Boys, I would hear a song or two, and then later someone would play me another, and so on.

I loved their sound. In preparing for this review I listened to the whole box set during a trip to Washington, DC, which made me aware of, on the one hand, how much of their material I still love, and on the other hand, how similar it all is. The tempos are all pretty much the same, the songs are pretty much all of the sentimental.. sweet variety, and the instrumentation for the most part is pretty rudimentary mandolin/gui-tar accompaniment. Now I am definitely of the school of less is more so that didn't bother me, but if you're looking for flash you won't find it here. If you're looking for the harder-edged duet sound and excitement of, say Bill and Charlie Monroe, the Louvin Brothers, or the Cooke Duet you won't find that here either. But for anyone interested in singing harmony, The Blue Sky Boys is an essential ingredient in the lexicon. I suggest you listen to the set sparingly and in doses, savoring the sweet sounds. ALICE GERRARD