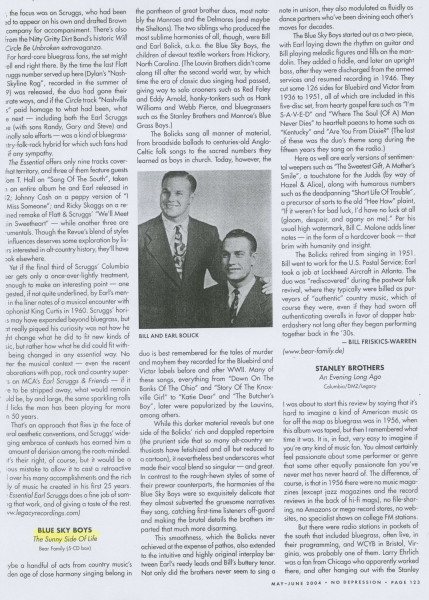 BLUE SKY BOYS The Sunny Side Of Life Bear Family (5-CD box)
Maybe a handful of acts from country music's den age of close harmony singing belong in the pantheon of great brother duos, most nota-bly the Monroes and the Delmores (and maybe the Sheltons). The two siblings who produced the most sublime harmonies of all, though, were Bill and Earl Bolick, a.k.a. the Blue Sky Boys, the children of devout textile workers from Hickory, North Carolina. (The Louvin Brothers didn't come along till after the second world war, by which time the era of classic duo singing had passed, giving way to solo crooners such as Red Foley and Eddy Arnold, honky-tonkers such as Hank Williams and Webb Pierce, and bluegrassers such as the Stanley Brothers and Monroe's Blue Grass Boys.) The Bolicks sang all manner of material, from broadside ballads to centuries-old Anglo-Celtic folk songs to the sacred numbers they learned as boys in church.

Today, however, the duo is best remembered for the tales of murder and mayhem they recorded for the Bluebird and Victor labels before and after WWII. Many of these songs, everything from "Down On The Banks Of The Ohio" and "Story Of The Knox-ville Girl" to "Katie Dear" and "The Butcher's Boy", later were popularized by the Louvins, among others. While this darker material reveals but one side of the Bolicks' rich and dappled repertoire (the prurient side that so many alt-country en-thusiasts have fetishized and all but reduced to a cartoon), it nevertheless best underscores what made their vocal blend so singular — and great. In contrast to the rough-hewn styles of some of their prewar counterparts, the harmonies of the Blue Sky Boys were so exquisitely delicate that they almost subverted the gruesome narratives they sang, catching first-time listeners off-guard and making the brutal details the brothers im-parted that much more disarming.

This smoothness, which the Bolicks never achieved at the expense of pathos, also extended to the intuitive and highly original interplay be-tween Earl's reedy leads and Bill's buttery tenor. Not only did the brothers never seem to sing a
note in unison, they also modulated as fluidly as dance partners who've been divining each other's moves for decades. The Blue Sky Boys started out as a two-piece, with Earl laying down the rhythm on guitar and Bill playing melodic figures and fills on the man-dolin. They added a fiddle, and later an upright bass, after they were discharged from the armed services and resumed recording in 1946. They cut some 126 sides for Bluebird and Victor from 1936 to 1951, all of which are included in this five-disc set, from hearty gospel fare such as "I'm S-A-V-E-D" and "Where The Soul (Of A) Man Never Dies" to heartfelt paeans to home such as "Kentucky" and "Are You From Dixie?" (The last of these was the duo's theme song during the fifteen years they sang on the radio.)

Here as well are early versions of sentimen-tal weepers such as "The Sweetest Gift, A Mother's Smile", a touchstone for the Judds (by way of Hazel & Alice), along with humorous numbers such as the deadpanning "Short Life Of Trouble", a precursor of sorts to the old "Hee Haw" plaint, "If it weren't for bad luck, I'd have no luck at all (gloom, despair, and agony on me)." Per his usual high watermark, Bill C. Malone adds liner notes — in the form of a hardcover book — that brim with humanity and insight. The Bolicks retired from singing in 1951. Bill went to work for the U.S. Postal Service; Earl took a job at Lockheed Aircraft in Atlanta. The duo was "rediscovered" during the postwar folk revival, where they typically were billed as pur-veyors of "authentic" country music, which of course they were, even if they had sworn off authenticating overalls in favor of dapper hab-erdashery not long after they began performing together back in the '30s. — BILL FRISKICS-WARREN (www.bear-family.de)