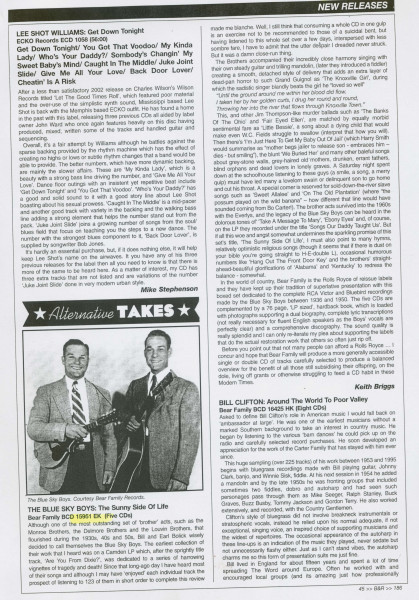 The Blue Sky Boys. Courtesy Bear Family Records. THE BLUE SKY BOYS: The Sunny Side Of Life Bear Family BCD 15951 EK (Five CDs) Although one of the most outstanding set of 'brother' acts, such as the Monroe Brothers, the Delmore Brothers and the Louvin Brothers, that flourished during the 1930s, 40s and 50s, Bill and Earl Bolick wisely decided to call themselves the Blue Sky Boys. The earliest collection of their work that I heard was on a Camden LP which, after the sprightly title track, 'Are You From Dixie?', was dedicated to a series of harrowing vignettes of tragedy and death! Since that long-ago day I have heard most of their songs and although I may have 'enjoyed' each individual track the prospect of listening to 123 of them in short order to complete this review made me blanche.

Well, I still think that consuming a whole CD in one gulp is an exercise not to be recommended to those of a suicidal bent, but having listened to this whole set over a few days, interspersed with less sombre fare, I have to admit that the utter de'Oair I dreaded never struck. But it was a damn close-run thing. The Brothers accompanied their incredibly close harmony singing with their own steady guitar and trilling mandolin, (later they introduced a fiddler) creating a smooth, detached style of delivery that adds an extra layer of dead-pan horror to such Grand Guignol as The Knoxville Girl', during which the sadistic singer blandly beats the girl he "loved so well" "Until the ground around me within her blood did flow. I taken her by her golden curls, I drug her round and round, Throwing her into the river that flows through Knoxville Town."

This, and other Jim Thompson-like murder ballads such as The Banks Of The Ohio' and 'Fair Eyed Ellen', are matched by equally morbid sentimental fare as 'Little Bessie', a song about a dying child that would make even W.C. Fields struggle to swallow (interpret that how you will). Then there's `I'm Just Here To Get My Baby Out Of Jail' (which Harry Smith would summarise as "mother begs jailer to release son - embraces him —dies - but smiling"), the blunt 'We Buried Her' and many other baleful songs about grey-stone walls, grey-haired old' mothers, drunken, errant fathers, blind orphans and dead lovers in lonely graves. A Saturday night spent down at the schoolhouse listening to these guys (a smile, a song, a merry quip) must have led many a lovelorn swain or delinquent son to go home and cut his throat. A special corner is reserved for sold-down-the-river slave songs such as 'Sweet Allalee' and 'On The Old Plantation' (where "the possum played on the wild banana" — how different that line would have sounded coming from Bo Carter!).

The brother acts survived into the 1960s with the Everlys, and the legacy of the Blue Sky Boys can be heard in the dolorous tones of `Take A Message To Mary', 'Ebony Eyes' and, of course, on the LP they recorded under the title 'Songs Our Daddy Taught Us'. But if all this woe and angst somewhat undermines the sparkling promise of this set's title, The Sunny Side Of Life', I must also point to many hymns, relatively optimistic religious songs (though it seems that if there is dust on your bible you're going straight to H-E-double L), occasional humorous numbers like 'Hang Out The Front Door Key' and the brothers' straight-ahead-beautiful glorifications of 'Alabama' and 'Kentucky' to redress the balance - somewhat. In the world of country, Bear Family is the Rolls Royce of reissue labels and they have kept up their tradition of superlative presentation with this boxed set dedicated to the complete RCA Victor and Bluebird recordings made by the Blue Sky Boys between 1936 and 1950.

The five CDs are complemented by a 76 page, 'LP sized', hardback book, which is loaded with photographs supporting a dual biography. complete lyric transcriptions (not really necessary for fluent English speakers as the Boys' vocals are perfectly clear) and a comprehensive discography. The sound quality is really splendid and I can only re-iterate my plea about supporting the labels that do the actual restoration work that others so often just rip off. Before you point out that not many people can afford a Rolls Royce ... I concur and hope that Bear Family will produce a more generally accessible single or double CD of tracks carefully selected to produce a balanced overview for the benefit of all those still subsidising their offspring, on the dole, living off grants or otherwise struggling to feed a CD habit in these Modern Times.
Keith Briggs