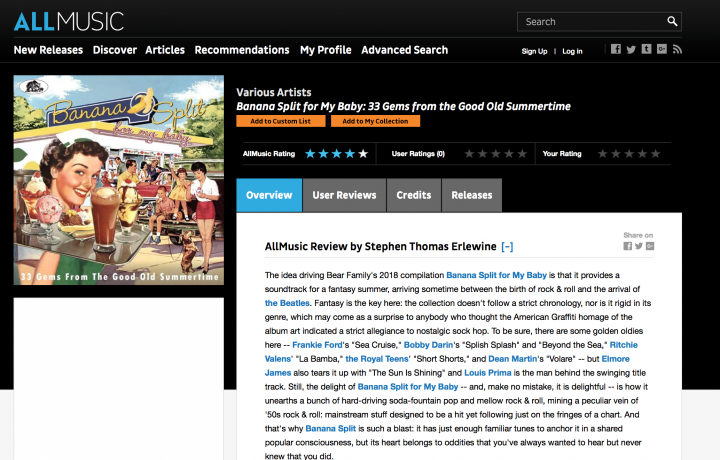 AllMusic Review by Stephen Thomas Erlewine [-]
The idea driving Bear Family's 2018 compilation Banana Split for My Baby is that it provides a soundtrack for a fantasy summer, arriving sometime between the birth of rock & roll and the arrival of the Beatles. Fantasy is the key here: the collection doesn't follow a strict chronology, nor is it rigid in its genre, which may come as a surprise to anybody who thought the American Graffiti homage of the album art indicated a strict allegiance to nostalgic sock hop. To be sure, there are some golden oldies here -- Frankie Ford's "Sea Cruise," Bobby Darin's "Splish Splash" and "Beyond the Sea," Ritchie Valens' "La Bamba," the Royal Teens' "Short Shorts," and Dean Martin's "Volare" -- but Elmore James also tears it up with "The Sun Is Shining" and Louis Prima is the man behind the swinging title track.

Still, the delight of Banana Split for My Baby -- and, make no mistake, it is delightful -- is how it unearths a bunch of hard-driving soda-fountain pop and mellow rock & roll, mining a peculiar vein of '50s rock & roll: mainstream stuff designed to be a hit yet following just on the fringes of a chart. And that's why Banana Split is such a blast: it has just enough familiar tunes to anchor it in a shared popular consciousness, but its heart belongs to oddities that you've always wanted to hear but never knew that you did.