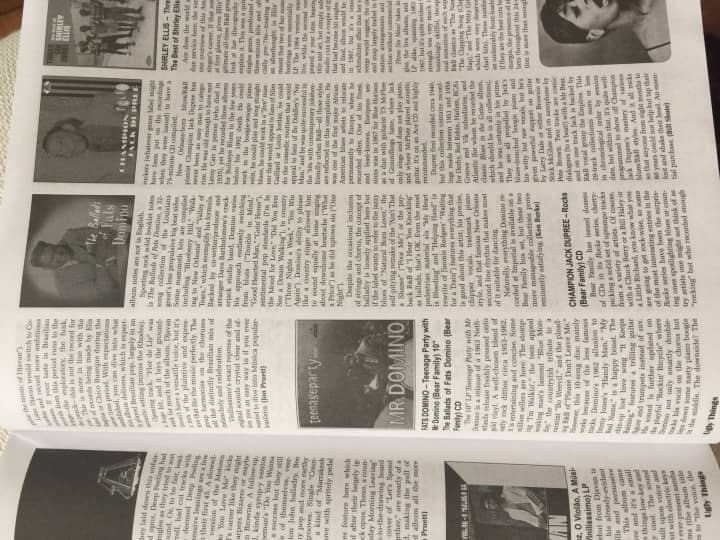 CHAMPION JACK DUPREE–
Rocks (Bear Family) CD Bear Family has issued dozens of CDs in its Rocks series, dozens of a solid set of up tempo tracks from a variety of artists. Of course, with a Chuck Berry or a BM Haley or a Little Richard, you know what you are going to get rock-wise, so some of the most interesting entries in the Rocks series have been the surprising ones spotlighting blues or country artists one might not think of as "rocking" but who recorded enough rockers (whatever ugenre label might when they were in the recordings „-minute CD issued) have New compiled. pianist Orleans-born blues/R&B Champion Jack Dupree rnezl!er been an easy man to ceau has categorize. o e •

He was old enough have :e'L:yCart'ersenLdiedin5). yet h recorded three albums Blues in the few years his 1992 death. He could work M the boogie-woogie piano vein, he could play and sinstraight blues, he could work in a "jive" se" man-ner that would appeal to fans of Slim 1 Gaillard or Louis Jordan, he could do the comedic routines that would appeal to fans of Bo Diddley's "Say Man," and he was quite successful in the '50s with contemporary jukebox-friendly urban R8,13—all those styles are reflected on this compilation. one of the first major African-American blues artists to relocate permanently to Europe, where he recorded often.

One of his finest, and least-known, European sessions was in 1967 for Blue Horizon as a duo with guitarist TS McPhee of Groundhogs fame, where Jack only sings and does not play piano, and where McPhee played acoustic guitar. It's on an Ace CD and highly recommended. Dupree first recorded circa 1940, but this collection contains recordings made between 1951 and 1958 for Derby, Red Robin, Harlem, RCAs Groove and Vik subsidiaries, and Atlantic (for whom he recorded the classic Blues in the Gutter album, which should be in all collections), and he was certainly in his prime.

They are all propelled by Jack's blues-drenched boogie piano and his witty but raw vocals, but he's given powerful support on guitar by Larry Dale or either Brownie or Stick McGhee and on saxophone by Pete Brown. Two tracks are comic dialogues (to a beat!) with a Mr Bear, and on one track Jack is backed by R83 vocal group the Empires.

80 years could not help but impessed foot and shake their head. tial purchase. (Bill Shute)