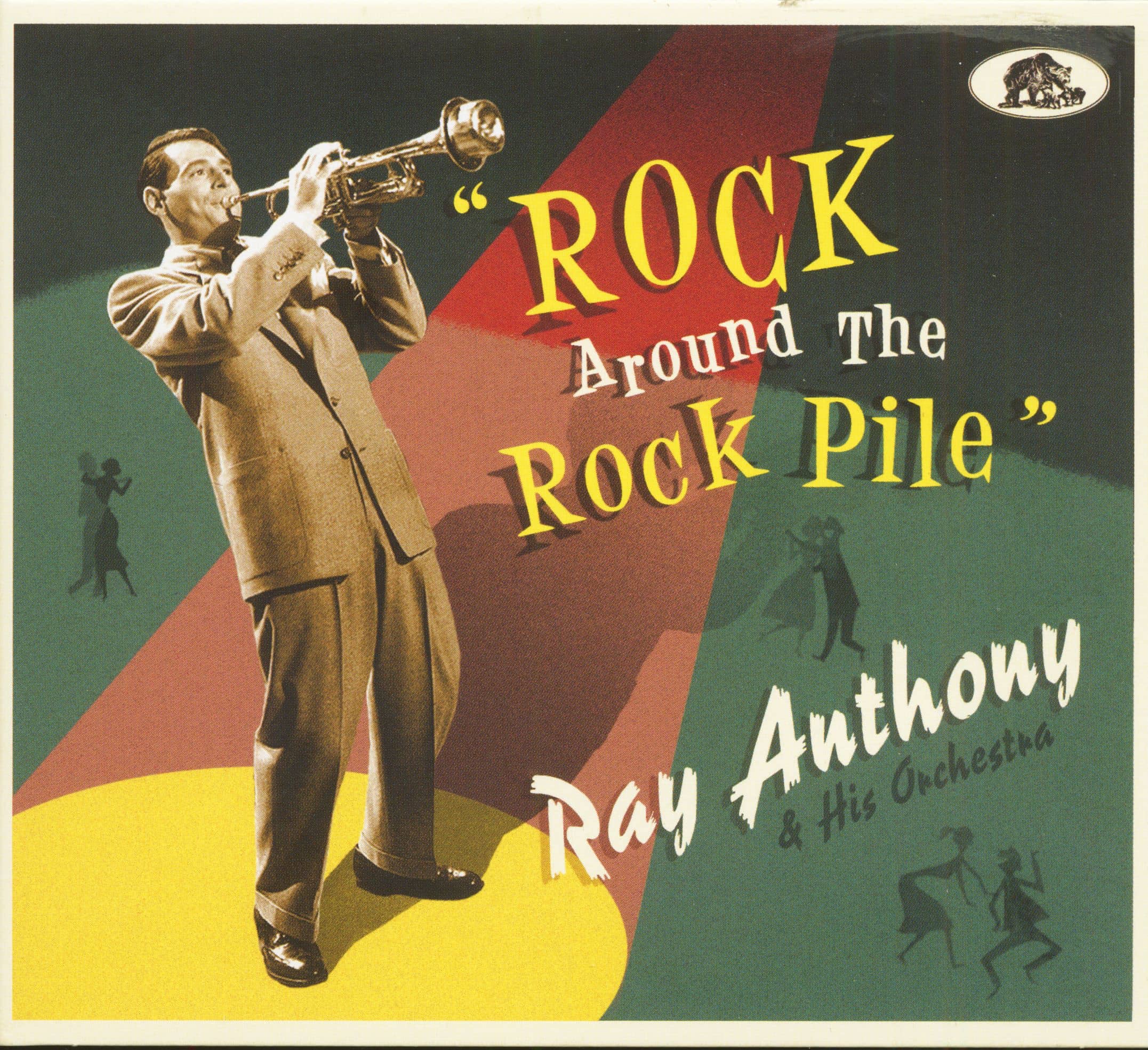 Many of the greats of the swing music era had fallen by the wayside by the time rock and roll reared its audacious head during the mid-‘50s. Trumpet-blowing Ray Anthony, whose roots were planted squarely in the big band era, took the seismic shift in musical trends in stride, navigating the unexplored terrain gracefully as he had when faced with previous innovations. That kind of major idiomatic adjustment required a musician who wasn’t mired in the past, and Anthony was already a deft instrumentalist who vacillated between hot swing material and sweeter fare without batting an eye. The handsome bandleader even appeared in several ‘50s rock films, managing not to appear out of place despite being past 30 years of age.

That’s not to say that Anthony gleefully leaped up and became a dyed-in-the-wool rocker when the style took precedence. He merely added the youthful sound to his considerable musical arsenal, so jumping dance-oriented recordings directly aimed at the teenaged demographic, notably his ‘The Girl Can’t Help It’ EP in 1956 and the ‘Like Wild’ LP four years later, ended up sitting side-by-side in his voluminous Capitol Records catalog with 1959’s MOR-oriented ‘Anthony Italiano’ and ‘More Dream Dancing.’ Something for everyone was apparently Ray’s motto, and he pulled it off—as this collection of his rock and roll-slanted sides for Capitol shows.

Born Raymond Antonini on January 20, 1922 in Bentleyville, Pennsylvania (situated outside of Pittsburgh), Anthony hailed from an uncommonly musical brood. His father led The Antonini Family Orchestra, also encompassing five of Ray’s brothers (including sax-blowing sibling Leroy, aka Leo) and a sister. Dad gave five-year-old Ray a cornet, and the lad got busy learning his way around the horn. From that age on, Anthony grew up in Cleveland, Ohio, honing his skills on his instrument as his family’s band played parties and weddings. Young Ray formed his own outfit in junior high school. Adding members as time went on, Anthony’s crew progressed to playing college dances around Cleveland, often in cahoots with a group led by Vincent Patti.

Anthony appeared with Miller’s band when it was prominently featured in the 1941 film ‘Sun Valley Serenade,’ starring John Payne and ice skating queen Sonja Henie. The Iowa-born Miller would post an incredible series of pop hits, including In The Mood, Moonlight Serenade, and Chattanooga Choo Choo, in four short years prior to his untimely 1944 death when his plane went down in the English Channel (he was overseas entertaining the troops). Anthony would only be a member of Miller’s organization in 1940-41; World War II was raging, and he enlisted in the U.S. Navy. While he was waiting to be called up to duty in early 1942, Ray spent a few months in the orchestra of saxist Jimmy Dorsey, another of the leading bandleaders in the country thanks to the success of his version of Green Eyes and several more.

Anthony conceived the rousing swinger Mr. Anthony’s Boogie with his frequent arranger George ‘The Fox’ Williams (the two had been in Miller’s orchestra together. Perfect for jitterbugging, the blazing instrumental, waxed October 16, 1950, found ‘The Young Man with the Horn,’ as Capitol billed him on an early EP that featured the number as well as one conversely called Mr. Anthony’s Blues that the same pair penned, soaring high and free. Ray put his orchestra, featuring an expansive bank of horns, through its torrid paces while keeping his trumpet positioned right on top of the brassy bombast and grabbing a little space for a tasty muted solo midway through.

During the fifties he had numerous hits including, 'Peter Gunn,' 'The Bunny Hop,' 'Harbor Lights' and a jazzed up version of the 'Dragnet' theme song. He appeared in several movies such as, 'The Girl Can't Help It,' ' This Could  Be The Night,' and 'Daddy Long Legs' featuring Fred Astaire. In 1953 Anthony’s band teamed up with Bob Eberly and Helen O‘Connell in a National Network T.V.  program and soon even had their own T.V. Show.

The popularity of most of the big bands in the fifties started to rapidly decline, but Ray Anthony’s Orchestra under the expert guidance of his friend Fred Benson stayed on top until well into the 1960s . Ray went on numerous Lounge tour circuits with a sextet and a female vocal duo called The Bookends. As the interest for this group grew Anthony constantly enlarged the lineup ending up with ten musicians and six female vocalists.

Ray Anthony carried on recording and performing with various musicians in the 1970‘s and the 1980. He began touring with a big band again. True to his roots he also formed 'Big Band 80s,' an  organisation dedicated to popularise big band music in schools, radio stations and other venues. 'Theman with the golden horn,' Mr. Ray Anthony came to stardom through the Glenn Miller Orchestra as Glenn's first trumpeter and has been one of big band music’s most dedicated ambassadors over the decades. We see him alive and well in 2018 at the proud age of 95!

(Submarine Records) 50 tracks A chance to hear again the wonderful sound of trumpeter Ray Anthony and his Orchestra as featured in a series of short fifteen minute radio recruitment programs made for The National Guard. This special low...
$18.75
Song preview
Ray Anthony: Dream Dancing With Ray Anthony (LP) Art-Nr.: LPENT13015