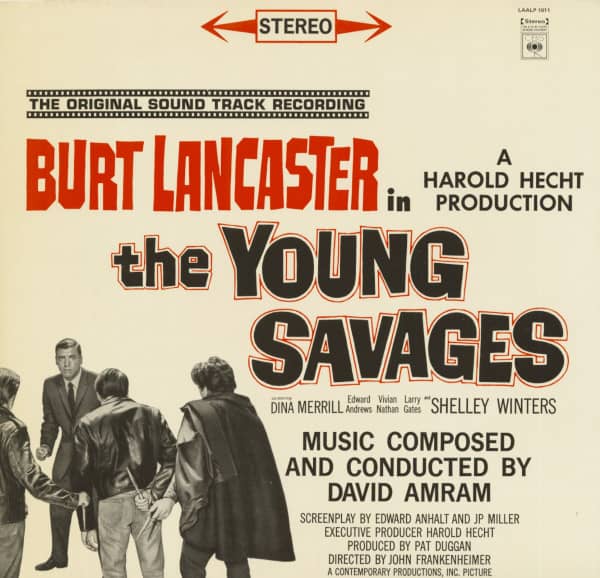 "The Young Savages", David Amram's first full-length score for a feature film, gave him the opportunity to fully exploit his diverse talents. He is a gifted classical composer, also a talented jazz musician, and the Ile score reflects his outstanding abilities in both areas. ius, Side One contains the film's jazz compositions, and Side Two contains the sensitive theme and compositions for the entire orchestra. The film shows realistically and straightforwardly the violence of youth gangs in New York City. Amram says of his score that it "makes a statement about the film itself, but it also represents my personal feelings towards New York, where I have lived and worked for the past six years. In fact, I worked in some of the neighborhoods portrayed in the film." Director John Frankenheimer and producer Harold Hecht gave Amram free rein. "They let me use jazz as an integral part of the picture instead of using it to underline violence, sadism or drugs - which is usually the case with pictures. Jazz is not heard in the fighting scenes, but in sequences that show the neighborhood in which the boys lived."
In the film, three boys murder a blind Puerto Rican boy and Deputy District Attorney Hank Bell (Burt Lancaster) prepares for prosecution. His wife (Dina Mer-rill) does not approve of the death penalty for the juveniles. Bell sees Mary Di Pace (Shelley Winters), his former lover and mother of one of the accused boys. He is determined to be impartial and also talks to the leaders of the Puerto Rican and Italian gangs. Both sides distrust him and one night he is brutally beaten. In the culminating trial scene, Bell does not advocate a first-degree murder penalty. The son of Maria is found not guilty and is sentenced to one year in an investigation for his participation in the crime. A boy is taken to a state mental hospital, and the sadistic, pathological instigator of the crime is imprisoned for no less than 20 years. The picture begins with a theme from "The Young Sav-ages", a duet between harmonica and guitar with a subtle Latin taste. As the three young delinquents walk through the streets of Spanish Harlem, the theme gives way to the violence and power of the switch blades in the parade, a march written on the basis of five notes played by five tuned timpani and developed by the entire orchestra; on the screen, the senseless murder...