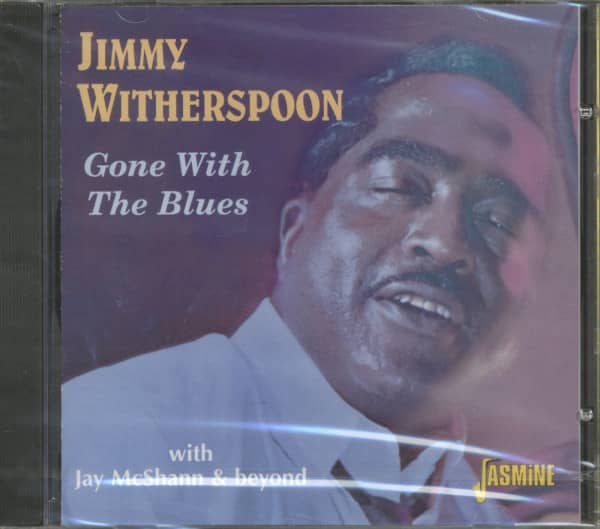 Jimmy Witherspoon: Gone With The Blues (with Jay McShann) (CD)

Although he hailed from the Kansas City blues shouting tradition led by Big Joe Turner and Jimmy Rushing, Jimmy Witherspoon made the great majority of his early solo sides out in Los Angeles, where there were more than enough R&B indie labels to keep him busy in the studio virtually non-stop. Chief among them was Modern Records, which cut him extensively during the postwar years. But they were by no means the only label to welcome 'Spoon to their rosters.

"Boy, I think I ran out of companies, I was on so many," the late singer said. "They didn't give you that much money anyway. If you didn't have a hit record, they didn't need you no more."  Witherspoon was born August 8, 1923 in Gurdon, Arkansas. "I've been singing all my life, in church, since I was about five years old," he said. "I always did want to sing." He got his big chance in 1943 in Calcutta, India, of all places. "I was in the Merchant Marines in World War II, and I was singing there with Teddy Weatherford's band," he said. "In '44, I came back to Vallejo, California, where my mother was living, and I joined Jay McShann then. That was my first job, really. I stayed with Jay for about four years."

Spoon replaced Walter Brown in pianist McShann's mighty orchestra (its alumni included Charlie Parker). He fronted the band on sides for Philo/Aladdin, Premier, and Mercury before making his own debut 78s for the L.A.-based Supreme logo in late 1947.  That's the label he waxed his eternal calling card for: the two-part Ain't Nobody's Business, recast dramatically from Billie Holiday's downtrodden version, copyrighted as T'aint Nobody's Bizness If I Do in 1922, and first recorded by Anna Meyers and the Original Memphis Five. "Somebody came up with it—Al Patrick, who owned Supreme Records,"  he said. "Then I changed the lyrics. It's not the same as 'T'ain't Nobody's Business.' It's a takeoff steal from it, but it's not the same lyric." McShann was there to roll the 88s. "That was in Los Angeles, and he came out there to play, and I asked him to do it with me, which he did. The changes and everything, that was his." The two-sider sat on theR&B charts an unbelievable 34 weeks in 1949, including one at number one.

Witherspoon jumped to Modern in 1948 and made a motherlode of swinging R&B and mellow blues, displaying his way-behind-the-beat phrasing on the latter. Who's Been Jivin' You falls into the former camp, driving like mad over guitarist Chuck Norris' relentless chord work (Maxwell Davis and Vido Musso were the saxists, with Henry McDade on piano, Ralph Hamilton on bass, and Jesse Sailes on drums). Spoon shared writer's credit with Modern co-owner Joe Bihari (as Joe Josea).

From Modern, Jimmy migrated to Federal, Checker, Atlantic, RCA Victor, World Pacific, and Vee-Jay before an acclaimed appearance at the 1959 Monterey Jazz festival introduced him to a new demographic. He remained highly active, even triumphantly coming back from a 1981 bout with throat cancer, until the disease came back to permanently silence him on September 18, 1997. 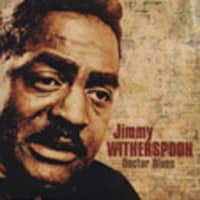 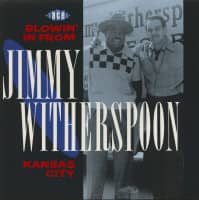 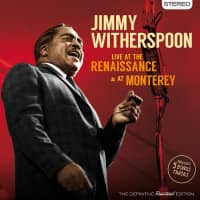 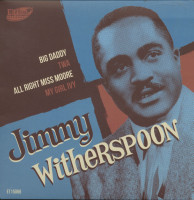