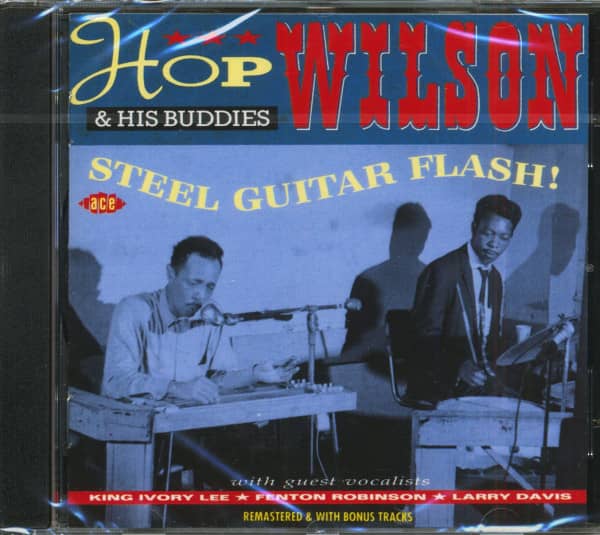 Raw, powerful, in your face. The blues of Hop Wilson are some of the toughest and most direct to come out of that toughest and most direct of cities - Houston, Texas. Born in the eastern part of the state, Hop Wilson absorbed not only the black Texas blues as sung and played by the likes of Blind Lemon Jefferson but also the heavily amplified, often wildly distorted, steel guitar sounds of the region's white Western Swing bands. He bought his first steel guitar at the age of 12 and by the early 50s he was working in Houston as a full-time musician. Joining Ivory Lee Semien's band, Hop and Ivory Lee recorded together for both Goldband Records in Lake Charles and Ivory Records at ACA's studios in Houston. The music they cut there ranges from the powerful blues of Broke And Hungry and My Woman Has A Black Cat Bone to the wild novelty R&B rocker Rockin' In The Coconut Top (with slashing steel guitar and clopping coconut sound effects). There??s the unlikely swing tune Toot Toot Tootsie GoodBye (a real Western Swing choice to stack against other equally unlikely examples of the genre such as Jimmie Revard's It's A Long Way To Tipperary) and dazzling instrumentals like Dance To It and Why Do You Twist. As a further bonus, among the 29 wonderful tracks on Steel Guitar Flash!...Plus are the previously unissued / Ain't Got No Woman, I Feel So Glad and I Done Got Over. All the tracks have been remastered and the sound quality is greatly improved on previous reissues of this fine music.