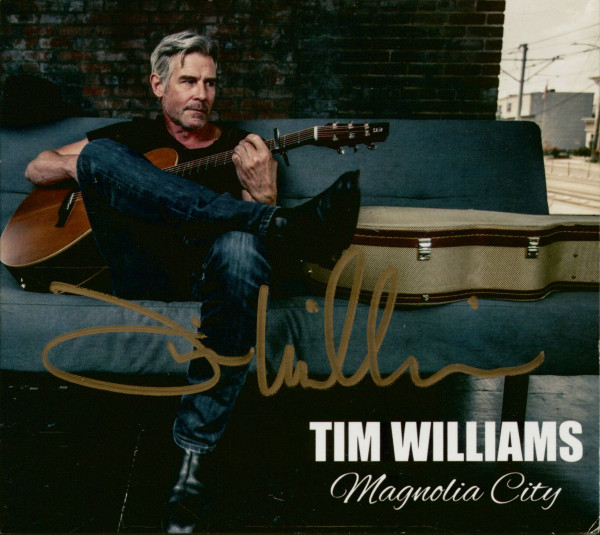 
“Forget the Dos Equis dude, Trivago Guy is the most interesting man in the world,” wrote Rolling Stone. Tim Williams, the Generation X spokesperson who has served as the North American face of Trivago since 2013 is much more than the sans belt guide you see on TV teaching you “how to find the ideal hotel for the best price.”

For this Houston, Texas reared actor and musician, he’d get his first taste for character driven performance as a teen in drama class. “We were living in New York City when my parents divorced when I was 13; and Mom, Sis and I headed back to Houston. In high school, I got into acting. I walked into the drama class one day after school and asked the teacher if she could make me an actor.”

However, acting wasn’t the only entertainment based passion that found its catalyst during his teen years. During this same period, he picked up the guitar as a reaction to the music that was being played in his household. His sister Lisa, three years his senior, would loan him Aerosmith, Led Zepplin and Pink Floyd records, but it was KISS that solidified his interest in live performing. Contrary to the headlining rock scene at the time, being raised in Houston, meant that Tim was unable to escape the influences of the vibrant folk and country scene that had a foothold in the area.

“My mother was a big influence in my direction of music. I remember watching the film Rockyand I came home from the theatre wanting to actually be Rocky. I cut my t-shirts workout style and wrote ROCKY in big black letters on them. Then Urban Cowboy came out and that is when I really started hearing country music — listening to the stories being told, the voices and the grittiness of it all. I wanted to be a cowboy. I wanted to sing like they did. I guess I was about 13- 14 years old when that movie came out, but, from then on, I knew I wanted to act and sing country music! It took a while, but if you never give up your dreams, the wall will fall for you some day.”

Musical aspirations would take a backseat as Tim made the move to New York City after high school to pursue his chances at landing some off-Broadway roles. He would eventually land his first role for TV on The Cosby Show, but would discover that no one would ever see the work as his scenes were too controversial for TV at the time and the storyline never made it past the cutting room. Additional opportunities arose and he finally made his TV acting debut on screen with Claire Danes in My So-Called Life. From there, Tim would land roles on hit programs likeLaw and Order, The Sopranos, Strong Medicine, etc. before an opportunity arose for a feature film in Germany. “My agent in New York was like ‘Are you crazy? You don’t speak German.’ I said ‘I don’t speak it, but I’ll learn it ’cause I’ve gotta work.”

The move to Berlin proved to be fruitful as opportunities developed in both TV and film. Tim would gain recurring roles on German programs Samt und Seide and Gute Zeiten, schlechte Zeiten among others. On the big screen, he starred in Valkyrie, Ninja Assassin, The Apparitionand Labyrinth of Lies. When the Germany based travel company Trivago, first auditioned Tim, he would serve only as a voice over talent, but on the second engagement with the company they decided to put him in front of the camera in a move that certainly proved to be a win for both, Trivago and Tim. Now, five years as the face of the brand that asks “Hotel? Trivago,” Tim’s artist endeavors find him returning to the place where his journey started years ago, Houston.

With his forthcoming album Magnolia City, Tim pays respect to his musical heroes Merle Haggard, Johnny Cash and Willie Nelson. The songs on the album were recorded in the home of country music, Nashville, Tennessee under the direction of Norbert Hamm, who has produced Herbert Groenemeyer – Germany’s most successful artist with over 13 million albums sold. “Where I grew up had a big influence on this record. Living in Berlin, Germany for the past 15 years has not always been easy for me. Sometimes you feel like a fish out of water. So I sing about my longing for Houston, my stories of love, travel and personal relationships, all wrapped up in a neo-traditional country style of music.“