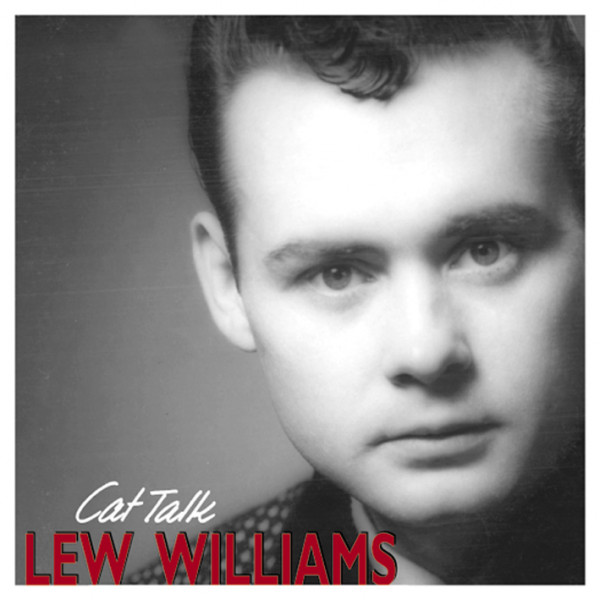 This article is deleted and can no longer be ordered!
Please inform me as soon as the product is available again.
P Secure bonuspoints now
Description
Learn more about Lew Williams
Review 0
Description
The original Imperial masters plus rarities from Lew's private collection. more
Close menu

The original Imperial masters plus rarities from Lew's private collection.

For decades, Lew Williams has remained one of the most intriguing mysteries of rockabilly. His small body of work is well-known: six of his eight Imperial recordings from 1955-56 have been reissued at regular intervals since 1977, covered, even plagiarized. Compilers and annotators like Bill Millar, who called him the "Cab Calloway of rockabilly," acknowledged that there was something unique about Lew Williams -- an almost jazzy feel and jivey, cockeyed, sometimes daring and often surprisingly supple lyrics -- and sides like Cat Talk, Centipede, Bop Bop Ba Doo Bop, and Something I Said have long been considered rockabilly or early rock and roll classics. A lone article from 'Folk And Country Songs' from 1957 established a very basic biography, but what became of him after that remained a tantalizing blank.

Until now, that is. Lew Williams is alive and well. Amid the dearth of knowledge, there was inevitably speculation, some of it misguided, about Lew and the influences that shaped his music and his hepcat patois. This collection sets the record straight. It contains 29 tracks -- more than half from Williams' private collection and never before released -- all his issued sides, plus amazing unissued demos like a June 1954 version of Cat Talk, the stunning My New Pink Suedes from late 1955, the original 1953 country combo version of Something I Said, and many others. The sides trace Lew's development from a young country singer through early, telling explorations of 'Cat Music,' and his singular rockabilly sides for Imperial, to subsequent demos made when he was concentrating increasingly on songwriting and his final stab as a recording artist for Dot's Hamilton subsidiary in 1958.

Lewis Wayne Williams was born on January 12, 1934 in Chillicothe, Texas, halfway between Fort Worth/Dallas and Amarillo on the Southeastern cusp of the Texas panhandle, the third son of Ernest and Callie Williams. Ernest was a farmer whose farm failed early in the Depression. He took up carpentry thereafter. Lew's brothers Ernest and Ed, much older, served in World War II and Ed, who died in 1982, was a highly decorated B-24 tailgunner.

"I suppose I could always sing," Lew recalls. "I was entertaining on amateur shows and contests when I was no more than four. I had a good voice and was loud enough to be heard. KVWC in Vernon used to have amateur shows all the time. During the summer, on some occasions, maybe monthly, KVWC did a show from Chillicothe. Believe it or not, the stage was a woman's big front porch, and people would bring chairs or pallets and pillows and sit on her lawn to watch the show. I was probably five or six and I just sang songs of the day. It wouldn't necessarily be country, it'd be whatever was popular at the time. I grew up listening to artists like Ernest Tubb, and Jimmie Davis -- one of the songs I used to sing was 'You Are My Sunshine.' I used to sing a lot of Gene Autry. I won those contests so often, I kind of expected to win...As I got older (probably nine), I didn't want to perform and refused to participate in the amateur shows...I thought it was kind of sissy being on some of those shows. None of my friends were on them. But my mother thought that was great, got a kick out of the idea. But I didn't really want to do that, so I was glad when she quit pushing me to do it. When we moved to Dallas, I was almost 12 and I don't know that I did any singing at all."

Around the time Lew entered high school in Dallas at the end of the '40s, that began to change. In the prosperous postwar years, youngsters like Lew were barraged with influences. "After World War II, there was such a difference. The people that I call the original rockabillies, those guys were too young for World War II. A lot of our musical background would be big band stuff -- Glenn Miller, Tommy Dorsey and all this. We'd be familiar with those songs. At the same time, we were listening to Ernest Tubb, listening to the real country, and, of course, the Grand Ole Opry ... Jimmie Rodgers songs -– I'd sing, 'All around the watertank..' ['Waiting For A Train.']. Actually I still sang that in college. We'd go to the movies on Saturday and we'd hear the singing cowboys: Gene Autry, Roy Rogers and so forth...But we had such a background. We didn't realize when we started playing that all of that would be influencing us, but it had to."

Black music, from folk country blues to sophisticated jump rhythm and blues, began to have a particularly strong effect. "Now back when I was in high school...the music that the black singers and black bands did was called Race music. There were not a lot of stations that played it. I don't think there was a black station in Dallas...but I know this: We'd go down to some record shops that had these neat records by these black artists...One that influenced me -- I must have sung this hundreds and hundreds of times and even performed when I first started playing guitar -- was one called 'Sixty-Minute Man' [a major hit for Billy Ward & the Dominoes in 1951 and considered a major seminal rock 'n' roll record by many]." Others who caught Lew's ear were the rediscovered folk blues legend Leadbelly and Houston-based jump blues bandleader-guitarist Gatemouth Brown. 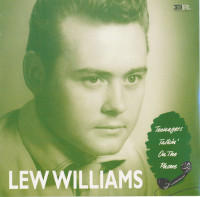