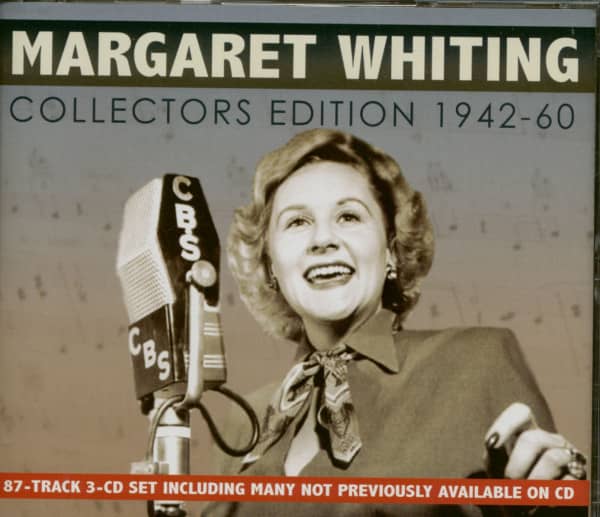 (2011/Acrobat) 87 tracks 1942-60.
Margaret Whiting, who died in January 2011 at the age of 85, probably never achieved as exalted a place in the pantheon of jazz and easy listening vocalists as she deserved. Quite why that was is hard to say - maybe the fact that, as the daughter of successful songwriter Richard Whiting, she got her start in the business via his relationship with Johnny Mercer, who had just founded Capitol Records, rather than paying her dues slogging round sleazy clubs, played against her. Maybe, also, her flirtation with country music in the '50s muddied the perception of her artistic integrity. Whatever the case, suffice to say that she was nevertheless a singer who has had a solid following of loyal fans who appreciate her versatility and effortless ability to interpret the classic repertoire of the day. In her many hits of the '40s with Capitol, her voice is uncannily reminiscent of both Ella Fitzgerald and Peggy Lee, which can hardly be a bad thing, while her country outings for the Dot label are equally evocative of the great performers of that genre. This collection, which was well in preparation at the time of her demise, is designed not as a definitive anthology of her work, but primarily to make available some of the many excellent recordings she made which have not been released or widely distributed on CD, and in the process trace the best and most important of her work during her most active years. It includes, on CD1 and the start of CD2, the majority of her hits for Capitol through to the early ?50s, including some fairly rare material, and on the rest of CD2 and CD3, includes the entirety of her Dot albums from the 1950s, 'Goin? Places', an excellent big band-based collection, 'Just A Dream', her country-oriented escapade, and 'Great Hits', re-recordings of her early material, which make an interesting comparison. In addition, there are selected tracks from her 1960 LP 'Margaret Whiting Sings The Jerome Kern Songbook'. We hope it is a collection that aficionados will welcome for a variety of reasons, and with nearly 90 tracks it should satisfy the most avid of fans.