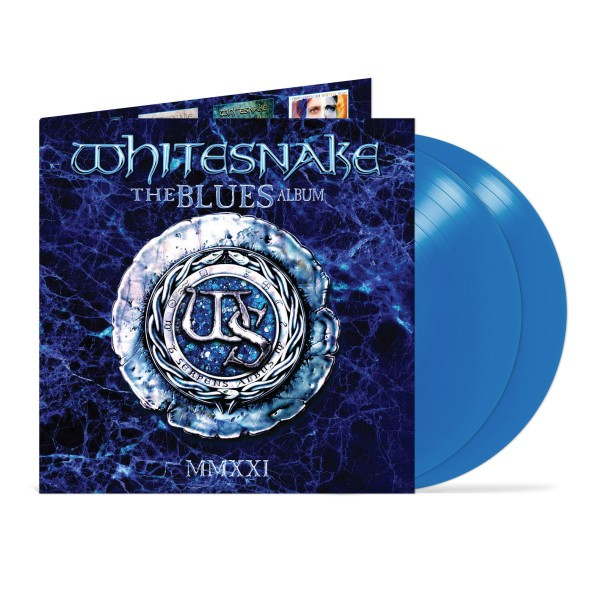 (Rhino) 14 tracks, gatefold cover.
Whitesnake celebrate the blues sound that inspired their multi-platinum career with a new collection. The Blues Album features remixed and remastered versions of the British band's best blues rock tracks and marks the third and final release in their Red, White and Blues Trilogy, a compilation series arranged by musical theme that began last year with Love Songs (red) and The Rock Album (white).

The Blues Album is released as a double LP pressed on blue 180g vinyl. Like The Rock Album and Love Songs, all tracks on The Blues Album have been re-recorded, remixed and remastered.

Whitesnake singer-songwriter David Coverdale says the music reflects how blues artists of the ilk of Muddy Waters, Howlin' Wolf and the three Kings (Albert, B.B. and Freddie) have been an ongoing inspiration to him. In the album's liner notes, he writes, "It's hard to put into words how deeply they penetrated my soul. But 'blues' to me is a beautiful word that describes emotional expression.... Emotions, be they sadness, loneliness, emptiness.... but equally those that express great joy, celebration and dancing, sensuality and love!!!"

The new compilation features a top-notch mix of hits and profound tracks originally released between 1984 and 2011 on six Whitesnake studio albums and Coverdale's solo album Into the Light.

The Blues Album also features two of the band's most successful songs, "Slow An' Easy" from Whitesnake's U.S. double-platinum album Slide It In and a mainstream rock hit in the U.S. Top 20 in 1984, and the smasher "Give Me All Your Love" from the band's self-titled album released in 1987, which has an eight-time platinum status in the U.S. alone. Other select Whitesnake tracks included are "Looking For Love," "Crying In The Rain" and "Steal Your Heart Away," which is already available.

In addition, the collection includes "If You Want Me," a studio recording released in 2006 as a bonus track on the live album Live...in the Shadows of the Blues. Coverdale's 2002 solo album Into the Light is represented in the form of "River Song."