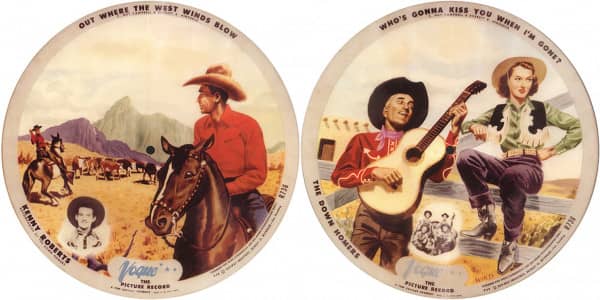 This article is deleted and can no longer be ordered!
Please inform me as soon as the product is available again.
P Secure bonuspoints now
Description
Learn more about Kenny Roberts / Down Homers
Review 0
Description
​​​​​​​High quality reproduction of the original Vogue vinyl picture LP. Hochwertige Reproduktion... more
Close menu

Today, Vogue Picture Records are prized for the work of their graphic artists who have slipped into obscurity. Signing their work mostly with their last names, if at all, 'Sprink,' 'Kanouse' and 'Wirts' captured the giddy optimism of post World War II America. Their images reflect that era and its music, both popular and classical.

Vogue Picture Records were manufactured in Detroit, Michigan, at Sav-Way Industries during 1946 and 1947. The brainchild of inventor and entrepreneur Tom Saffady, Vogue records were designed to get attention. In an age of highly breakable, black shellac 78rpm records, Vogues were different. Saffady used an aluminum platter as his base, adding a color drawing that completely covered the aluminum. The platter was then laminated with clear vinyl, into which the music was encrypted. The finished product was shipped in opaque sleeves through which the record could be seen.

Vogue records featured a wide variety of artists, hit parade star Joan Edwards and popular singer Marion Mann  to country acts like Lulu Belle and Scotty, Patsy Montana, and the Down Homers. Dance bands and orchestras were a major force in the music of the time, and sweet bandleaders Clyde McCoy, Art Kassel, Art Mooney, Shep Fields, Frankie Masters, and Sonny Dunham all recorded for Vogue.

Latin rhythms and dances were enjoying popularity then, so Vogue released two albums of rhumba lessons. A third album of 'Society Rhumbas' featured Dick LaSalle and His Society Orchestra, as well as sambas courtesy of Enric Madriguera and His Orchestra.

There were Vogues for the children in a two-record set that tells The Trial Of 'Bumble' The Bee and The Boy Who Cried Wolf. Novelty songs were popular then, as now, so Vogue recorded ones like Humphrey, The Sweet Singing Pig. There was a little jazz, courtesy of The Charlie Shavers Quintet and some light classical music like Rhapsody In Blue and Scheherazade.

Seemingly, Vogues offered something for everyone, but in less than two years they disappeared from the scene. The reasons may never be fully known because a fire at the plant destroyed the business records and masters, but it appears that there were production problems and distribution problems. And the cost of an individual Vogue was two to three times the price of a regular black shellac 78rpm record.

With variations in numbers, around 75 different Vogues are sought by today's collectors, although enough gaps in the numbering leave hope that a 'new' Vogue will turn up. The Association of Vogue Picture Record Collectors exists as an organization of Vogue collectors from around the world dedicated to the enjoyment of these reflections of a more innocent and optimistic era.