Another outstanding release in Bear Family's 'Rocks' series, this one features thirty of the greatest rock 'n' roll recordings by the most diehard, dedicated rock 'n' roller of them all - Gene Vincent.

Includes all five US hits: Race With The Devil, Bluejean Bop, Lotta Lovin', Dance To The Bop and - one of the - greatest moments in the history of recorded sound - Be-Bop-A-Lula.

There are heaps of Gene Vincent compilations. So many, you practically trip over them. This one is different and then some: It's simply the finest concentrated distillation of Gene Vincent's out 'n' out rock 'n' roll tracks you will ever hear.
These magnificent recordings have a febrile, lascivious quality unmatched by any of his competitors. They're nonsense songs about sex, hotrods, frenzied bopping and uncontrollable limbs in red-blue jeans, always epitomizing the hub-cab stealing ne'erdo-well of a dozen high-school exploitation movies.

There was no singer quite like Gene Vincent. His lean, mean, high-pitched vocals, laced with screams and yelps on a cushion of fluttery echo, provided the blueprint for every late-blooming rockabilly band and beat-group singer, John Lennon included. And his guitarists were equally radical: Cliff Gallup, the Blue Caps spark-plug, became a huge influence on six-string stuntmen the world over.

Gene Vincent was a strange, self-destructive mess of a man whose road was always rocky.

Gene Vincent drank to excess, limped with a rotting leg, fathered the rock 'n' roll life style and died at 36. But no one has made better rock 'n' roll music before or since. Well, it knocked me, bim bam

Tremendous and real rockin' compilation of Gene Vincent & his Blue Caps! A real blast from the beginning to the end! It's the third time I spin that silver platter today! Elvis is 'The King Of Rock'n'Roll' but Gene Vincent is the 'God'! 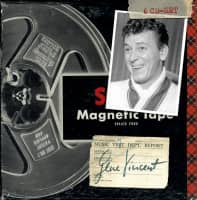 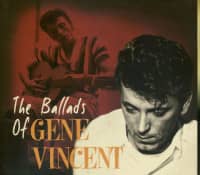 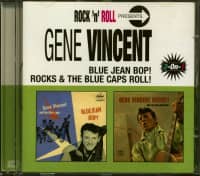