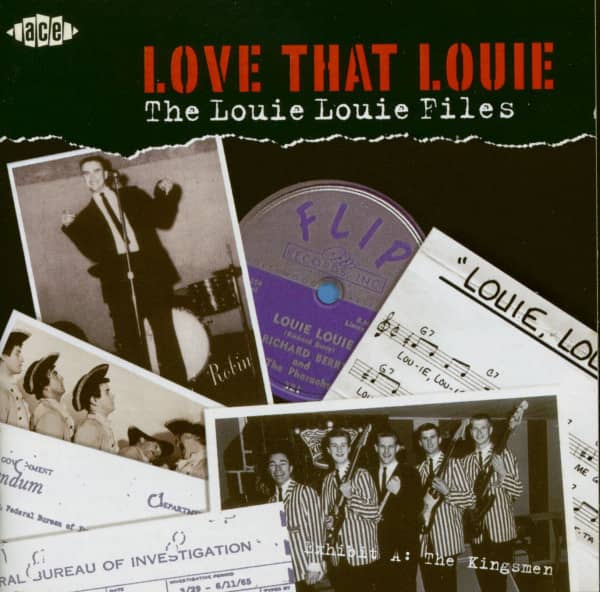 An entertaining and fun trawl through the evolution of the ultimate three-chord rock 'n' roll anthem - Louie Louie. True, there have been 'Louie' compilations before but this is definitive - avoiding novelties and istead focusing on the history and influence of the song in the 1959s and 1960s. Love That Louie is divided into 'chapters' that trace the development of this song of songs. We commence with 'The Original Louie' where Richard Berry & The Pharoahs' 1957 Flip Records original gets its first ever legitimate reissue, from master tape.
-
Louie Louie:

When Richard Berry sold his 'little song' for a few hundred dollars so that he could get married, he could not have had any idea of the millions of dollars that were saying 'me gotta go' to him.
A prolific songwriter and self confessed 'studio hound', Richard had appeared on countless recordings, under many different group names. He had a bunch of hits at Modern Records, and then moved to Flip. Louie Louie was initially the flip of his second 45 for the label, but was quickly flipped to the top deck. It still wasn't a hit.

So when Richard sold the rights along with a bunch of other tunes, it was no big deal. Uh uh - but then in 1961 along came Rockin' Robin Roberts & the Wailers out of the Pacific Northwest. Taking a lead from the live version by local legend Ron Holden, they cut the record that was to eventually turn Richard's 'little song that was a miss' into a rock'n'roll icon. Louie Louie became a regional hit, and the local garage bands were all covering it. But it wasn't until 1963 that the Kingsmen's version took off nationally.

It hit the top spot in Cashbox and it has always been rumoured that in-house quality control refused to let it go all the way in Billboard. This was one primitive slice of garage rock. It might not have even made #2 in Billboard if it had not been for the fact that in schools all over the US singer Jack Ely's incoherent vocals were turned into purple prose. Even the FBI got involved with the real meaning of Louie. At one stage Richard was hauled in by the Feds and interrogated over what the lyrics 'really' were. The sight of an FBI man on the floor with a record player manually spinning the Kingsmen's version backwards proved too much for Richard - he just had to laugh. 'You know we can put you so far away, that your family will never see you again' came the retort! Yikes!

These guys were upset. But Richard's little song had, in true folk tradition, been constructed from a borrowed riff from a Latin band, a sly Caribbean rhythm from Chuck Berry and a lyric idea from Johnny Mercer, based on the song frequently known as Set 'em Up Joe, and no more risqu?© than that. Why it eventually took on such an iconic status is anyone's guess. Everyone knows it as a garage band anthem, even the most inept of line-ups can sledgehammer out that riff. But how come it became so big, that Otis Redding cut it as a soul record, the Sandpipers as Latin light and Sounds Orchestral as an MOR classic? Well by the time you have listened to the Louie Files and read Alec Palao's erudite sleeve note, you will certainly be a lot closer to the meaning of Louie.

Addendum When we were putting this CD together, we wanted a ska version on there to take it back to the Caribbean. Experts were consulted about the best ska version to use, and all of them drew a blank. There just aren't any. If ever a song was begging to be done in a ska style, then it's got to be Louie. So we ended up with Toots' reggae version and no bad thing that is too.